SALISBURY – A member of Wicomico County’s administration has resigned from his position to assume a similar role in Worcester County.

On April 30, he will step into his new role as Worcester County’s assistant chief administrative officer, taking over the position held by Kelly Shannahan, who will retire Aug. 21.

“I’ll have four months to work alongside Kelly,” Young said. “It’s ideal to learn from the person you are replacing, so there was some foresight on Worcester’s part.”

In 2007, he began his first public sector job with the City of Salisbury. And from 2011 to 2014, he served as a senior civil engineer and stormwater project manager for the City of Hampton, Va.

During his tenure with the public works department, he managed the $8 million Morris Mill water tank and distribution line project. Officials also recognized Young for developing solutions to the dredging of the Wicomico River and producing significant improvements to the financial sustainability of Wicomico’s solid waste division.

“I have a really strong infrastructure background,” he said. “I understand the importance that it has on economic development and quality of life.”

Since 2017, Young has served under Wicomico County Executive Bob Culver as the assistant director of administration. In his position, he has helped manage county operations, supervise department heads and oversee the county budget.

“During my time in that role, I’ve been involved with a little bit of everything,” he said.

Young’s resignation will be the second departure within Wicomico County’s executive branch in recent weeks. Earlier this month, for example, Director of Administration Wayne Strausburg announced his plans to retire at the end of March.

But Young said it was not his intention to leave the administration during a time of disarray.

“I made my decision prior to Wayne announcing his retirement and prior to Bob being diagnosed with liver cancer,” he said. “Since I’ve submitted my application, a lot of stuff has gone down.” 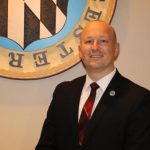 While he acknowledged his strong working relationship with the administration, department directors and elected leaders in Wicomico County, Young said he is eager for the next chapter in his career.

“I see it as everything will work out in the end …,” he said. “I appreciate the experience and the efforts given to me by the executive and Wayne.”

“The team at Worcester is great,” he said, “and I look forward to being a part of it.”

In 2005, Young earned a bachelor’s degree in civil engineering from the University of Maryland and later obtained the professional engineering certification. He will take over for Shannahan, who will retire later this year after 30 years of service to the county.

Prior to his work in the public sector, Young held a job at his father’s engineering and surveying company.

Young, who was raised in Pocomoke, said he is excited to work for his native county.

“I’m grateful for the opportunity and eager to apply my local government experience in this role,” Young said. “I look forward to working for the Commissioners of my home county.”