OCEAN CITY – Efforts to transform a historic downtown building into a museum will move forward thanks to the generosity of a local bank.

On Dec. 31, the Bank of Ocean City closed its branch on the corner of Dorchester Street and South Baltimore Avenue. But instead of having the historic building sit empty, officials are hoping to convert the site into additional exhibit space for the Ocean City Life-Saving Station Museum.

For decades, the Ocean City Life-Saving Station has operated from its current location on the south end of the Boardwalk. The building – which was once a working lifesaving station – is home to exhibits and events highlighting the history of Worcester County’s coastal region.

In 2018, the Ocean City Museum Society backed away from a proposal to expand the museum eastward, which required state approval. But Tingle said their expansion efforts did not go unnoticed.

“I’ve been reading about them trying to expand and acquire more space,” he said. “So when we were actively discussing what we were going to do with this branch, we agreed we wanted to do something that was going to be good for the entire community.” 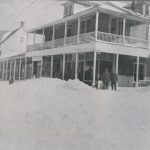 The plans for the downtown Bank of Ocean City branch mirror how the building looked many years ago. The building is pictured after a major snow storm in 1917. Submitted Photo

To that end, Tingle approached the museum’s board of directors with a plan to transfer ownership of the building to the town for the museum’s use. Board President Nancy Howard said the donation will allow for additional museum space off the Boardwalk.

“Our board is beholden to the bank,” she said. “We are just delighted. It will help us forward the mission of the museum.”

Howard explained that plans for the South Baltimore Avenue property will not replace the museum’s efforts to expand at the Boardwalk location. It will, however, complement other programs and exhibits currently featured at the museum.

As the board continues to discuss how the museum will utilize the interior space, Howard said plans to renovate the building’s exterior are moving forward.

“We don’t want this building to be a blight on downtown,” she said. “So that’s why right now we are concentrating on the outside, getting it cleaned up and looking good.”

Officials explained plans for the South Baltimore Avenue building go hand in hand with revitalization efforts in Ocean City. Tingle said the goal is to restore and preserve the historic property and attract people to the downtown area.

“We are just trying to save a little bit of Ocean City’s history,” he said.

Museum board member John Fager said plans for the building include the removal of the two-story columns and the construction of a second-story porch, among other things.

“It will change quite a bit from the way it looks now to the way it will look a year from now …,” he said. “It’s going to look like how it looked in its early juncture.”

It is estimated that the downtown building was constructed in the mid-1910s. And for the past century, it has been the home of the original Bank of Ocean City.

Tingle said the decision to shutter the branch late last year was not an easy one. Until 1972, when a second location was opened off Coastal Highway, the bank’s entire operation was housed in the historic building. He noted many shareholders remember opening their first bank accounts at that location.

“Banking has changed, and people don’t really come to banks as much anymore,” he said. “It’s all electronic. So our business has been slowly falling off here.”

But Tingle said he is excited for the future of the building.

“It wasn’t really functioning well as a bank,” he said. “So restoring it to another use allows the building to stay here.”

“Basically, we have a gift, an opportunity here to save another small piece of the history of Ocean City,” he said. “That’s what we want to do, so generation after generation can come here.”