OCEAN CITY – Community members are encouraged to start the new year on a positive note by attending the annual Mayor’s Prayer Breakfast in Ocean City this month.

On Jan. 10, the Greater Ocean City Chamber of Commerce, along with its participating community sponsors, will host the 2020 Mayor’s Prayer Breakfast at the Clarion Resort Fontainebleau Hotel in Ocean City.

For nearly 30 years, the Mayor’s Prayer Breakfast has served as an uplifting event where community members – including residents, elected officials, church congregations, local police and fire departments, the business community, educators and nonprofit organizers – can come together for an inspiring message.

“We do this because we want to have a positive start to the new year and share a positive message,” Lisa Layfield, events director for the Greater Ocean City Chamber of Commerce, said.

Strawberry, however, also had his fair share of challenges.

A description of this year’s keynote speaker reads, “A baseball legend, he was at the top of his MLB game in the 80s and 90s, winning a World Series with the New York Mets and three with the New York Yankees. But life took a different turn after baseball. Drug abuse, house arrest and rehab were just the beginning. Today Darryl is an ordained minister and Christian speaker with a story that is filled with truth, hope and inspiration.” 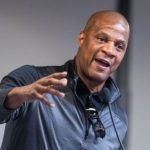 Layfield said Strawberry’s hour-long presentation is a story of redemption.

“Darryl has a really amazing story,” she said. “It’s not really about his baseball career so much as it is about his battle with addiction and his recovery. It’s definitely a story that inspires people and shows people that there is hope. Unfortunately, everyone knows of someone who is battling addiction. His message is much needed in the time in which we are living.”

The 2020 Mayor’s Prayer Breakfast will be held on Friday, Jan. 10, in the Crystal Ballroom of the Clarion Resort Fontainebleau Hotel. Check-in will take place from 7 a.m. to 7:45 a.m., and the event will begin promptly at 8 a.m.

Ticket are on sale now for $20 each or $300 per sponsor table, which includes 10 tickets and sponsor recognition on the table and in the program. This year’s community sponsors include, Bayshore Development/Jolly Roger Amusements, Bank of Ocean City, Farmers Bank of Willards, Carrabba’s and Mountaire Farms.

“It is through our sponsors that we are able to bring speakers to Ocean City,” Layfield said.

Tickets can be purchased online at www.oceancity.org or by visiting the Greater Ocean City Chamber of Commerce, located on the corner of Route 50 and Route 707 in West Ocean City.

“We always want it to be something that inspires people at the beginning of each year …,” she said. “It’s quite an experience to be able to meet him. He’s very excited about coming here.”

Lower Shore Hospitals Prepared For COVID Surge If It Happens

OCEAN CITY — With Maryland’s key COVID metrics continuing to surge in the wrong direction, Gov. Larry Hogan this week announced more efforts to stem the spread including mobilizing more capacity and staffing at hospitals, but on the Lower Shore, area hospitals appear to be coping thus far.In his weekly press conference on Tuesday, Hogan… Read more »

OCEAN CITY — While no decision was made, public safety officials seemed less than keen on expanding OC BikeFest to a 10-day, two-weekend event with the second weekend overlapping with the unsanctioned and unwelcomed pop-up car rally.OC BikeFest promoter Chase Michael on Tuesday pitched the idea of an expanded Bike Week event in Ocean City… Read more »

BERLIN – Holiday season is in full swing in downtown Berlin.While the pandemic has prompted changes, the town is doing its best to remain festive this December. A successful Ice Ice Berlin last Friday is being followed up with the town’s new Light up Berlin home decorating contest.“The response has been overwhelming,” said Ivy Wells,… Read more »

Worcester County Sheriff: ‘Law Enforcement Officers Are In The Battle Of Our Lives In This Upcoming Legislative Session’

OCEAN CITY — With state lawmakers expected to debate several police reform bills early next year, a local sheriff this week made an impassioned plea not to paint all law enforcement with a broad brush.Following a series of high-profile national incidents this year, there have been calls for defunding police and law enforcement reform in… Read more »