BERLIN — After three decades-plus on the sidelines under the bright Friday night lights at Stephen Decatur, longtime fixture Bob Knox on Tuesday announced he was stepping down as head football coach at the Berlin school where he has taught for 46 years.

Knox’s announcement came during a brief and solemn press conference on Tuesday at Decatur. Knox began teaching history at Decatur 46 years ago and started as an assistant football coach before taking over the reins in 1983. In the 36 years since, Knox has compiled a 237-154 record at Decatur and led the Seahawks to 10 state playoff appearances including two trips to the state semifinals.

In 2018, Knox was inducted into the Maryland Football Coaches Association Hall of Fame during a special ceremony at the University of Maryland. He is among the top 20 all-time for high school football wins in Maryland and at the time of his induction into the Hall of Fame, his 232 wins ranked him second among active coaches in the state.

Decatur Principal Tom Sites led off Tuesday’s press conference with a brief introduction, but those few in the room were familiar with the subject matter.

“This has been a long time coming,” said Sites. “Bob has been here 46 years including 35 as head coach and we’re sad to see him leave. His legacy will last around here for many, many years.”

“As a former player and a former assistant coach for 11 years and as a former principal, today is a bittersweet day for this school and this entire community,” he said. “It’s been an honor and a privilege to be a part of this for all of these years.”

For his part, Knox was his typical, humble self during the proceedings. While soft-spoken would never be used to describe Knox on the football sideline, or in the classroom for that matter, he was decidedly sullen during the announcement on Tuesday.

“It’s been an honor and a pleasure to be the head coach at Decatur,” he said. “I’ve seen a lot of changes over the years and all of them have been positive.”

Knox said he knew the time was right after some soul searching, consulting with his family and even list-making. He considered stepping down four years ago when his grandson was ill and did take a season off, but returned for three more seasons.

“Four years ago, when my grandson got sick, I sat down and made a list of all of the things I enjoyed the most about this job including interacting with the kids, game days, the atmosphere on Friday nights and all of those things, and I also made a list of some of things I didn’t completely enjoy — the tedious administrative kinds of things,” he said. “At that time, the first list far outweighed the second list. In the last year, I revisited those lists and talked it over with my wife and I just think now is the time.” 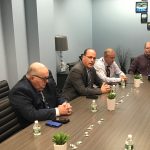 During Tuesday’s retirement announcement, Knox, head of table, said, “It’s been a great ride. All of those Friday nights on the sidelines are what I will miss the most. I’ll be around. I’m not going anywhere. It’s just time to spend more time with my family.”

Knox said he told his players of his decision last week. He will continue to teach history at Decatur, and while he won’t be wearing the headset on Friday nights, he won’t stray far from the program he has nurtured for three decades-plus.

“It’s been a great ride,” he said. “All of those Friday nights on the sidelines are what I will miss the most. I’ll be around. I’m not going anywhere. It’s just time to spend more time with my family.”

While he has been amassing wins and making trips to the state playoffs for 30-plus years, Knox said it has always been about his young players.

“As you all know, I’m old school,” he said. “I’m the same way in the classroom and you have to adjust and adapt to the times. The things kids need the most from sports, things like respect, responsibility and teamwork, all of those are ingredients of football and I hope I have instilled those things in my players over the years.”

Knox has assuredly implanted those attributes in his young players over the years, attributes that likely carried over for generations for more than a few of his former players. After three decades on the sidelines, many of Knox’s former players had sons and nephews come through the program.

Knox’s list of favorite moments on the sidelines at Decatur for three decades-plus were too numerous to mention, but he did recall one from the 1980s that was particularly memorable. Knox said old rival Bennett was on a two-year unbeaten streak including two state championships and faced Decatur when the teams were number one and number two in the standings.

“It was tied at 0-0 late in the game and we got an interception return for a touchdown to win the game 6-0 and end their streak,” he said. “I had a young assistant up in the press box to be my eyes in the sky and he ran down the stands, ran across the field and leaped into my arms. That assistant coach was Lou Taylor.”