SNOW HILL – The Worcester County Commissioners selected Joe Mitrecic to serve as their president this week.

On Tuesday, during the commissioners’ annual election of officers, Commissioner Bud Church nominated Mitrecic for president. The commissioners voted unanimously in support of the nomination.

“I’d like to thank all the commissioners for their support,” Mitrecic said. “Sometimes these can be contentious times, I’m glad it went smoothly. My phone is always open to each and every one of you. Anytime you have an issue please feel free to call me. Anything you want on the agenda, I promise I will get it on there in a timely manner.”

Mitrecic, who spent the past year as vice president of the board, will replace Commissioner Diana Purnell as president. Purnell held the position for the past two years.

“It’s my pleasure to pass the gavel to Joe,” she said.

She thanked the commissioners for allowing her to spend two years as president.

“Thank you for working with me,” she said. 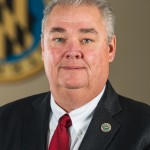 Mitrecic, who was elected in 2014 to represent District 7, owns Mitrecic Builders, a local construction company. Prior to becoming a commissioner he served two and a half terms on the Ocean City Council.

The commissioners voted unanimously in support of a nomination for Commissioner Ted Elder as vice president. Elder, a longtime school bus contractor, was elected to represent District 4 as a commissioner in 2014.

“I just want to thank the other commissioners for showing their regards to my ability to hold this position,” he said.

Commissioner Josh Nordstrom thanked Purnell for her service as president.

“It’s not an easy place to be,” he said. “I’m sure Commissioner Mitrecic will find that out. Thank you Diana for all your service.”