BERLIN – Unprecedented crowds descended on Berlin last week as the town kicked off the holiday season with its annual tree lighting.

On Friday, shops were open late to entertain hordes of people, locals and visitors alike, who came into town for the annual tree lighting ceremony. The following day, merchants welcomed shoppers as the town promoted Small Business Saturday.

“At least one shop is closed today because they’re almost sold out and they’re restocking their shelves,” said Ivy Wells, the town’s economic and community development director, on Monday.

Wells said the town was forced to close the streets to vehicles earlier than intended Friday as crowds became too large for sidewalks to handle. Visitors filled the streets around the Atlantic Hotel, where Mayor Gee Williams officially lit the town’s tree at 6 p.m. As they admired the tree, onlookers were treated to a surprise snowfall.

“That was fun,” said Wells, who orchestrated the surprise. 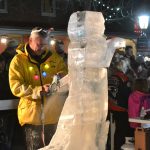 Erik Cantine is pictured at work on his Frozen-themed ice sculpture.

She did extensive research on snow machines before selecting what she considered the best environmentally friendly option for the town.

“This was months in the making,” Wells said. “We kept it a secret.”

She noted that this year’s event, in addition to experiencing increased attendance, benefited from more business involvement. The Calvin B. Taylor House Museum joined the festivities for the first time, hosting candlelight tours throughout the evening, while Stevenson United Methodist Church provided musical entertainment with a Christmas carol singalong. As it has in the past, Ocean Downs Casino sponsored an ice carving demonstration on Main Street.

“Everyone had a great time,” Wells said. “What makes the event wonderful is it’s a family reunion for everyone who comes home for the holidays.”

Wells reported that shops stayed busy Saturday, as the town promoted the nationwide shop-local initiative that takes place annually the Saturday after Thanksgiving.

As for upcoming holiday activities in Berlin during the month ahead, after the Christmas parade set for Thursday, free carriage rides will be offered each weekend until Christmas. Most shops will feature extended hours, though they vary by store. Wells encourages visitors to check out the gingerbread houses on display by 28 of the town’s businesses and organizations and vote for their favorite.

Another new addition to Berlin’s holiday lineup is Mistletoe on Main Street, a social media contest being help in partnership with the Atlantic Hotel. Between now and Jan. 1, people are encouraged to take a kissing selfie under the mistletoe hung in various areas throughout town and share the photo on Instagram and Facebook with the label #GetaRoominBerlin to be entered for a chance to win an overnight stay at the Atlantic Hotel.

“Everybody seems to really like the idea,” Wells said.

The town will end the month with its annual New Year’s Eve Ball Drop, which features a children’s event at 6 p.m. followed by an event for adults at 10 p.m.