BERLIN – When Berlin officials approved plans for the addition of apartments to the Purnell Crossing development, residents were quick to question the impact they would have on local schools. They worried enrollment, which seems to always be on the rise, would increase dramatically between the apartments under construction on Seahawk Road and those planned for Old Ocean City Boulevard.

“The world is about to bear down on this part of the Eastern Shore and we’re just not prepared,” Berlin resident Jeff Smith said.

In the last five years, enrollment in Worcester County Public Schools (WCPS) has increased 2%. While the rise in students overall is slight, north end schools have seen a bit more growth, with a 3% increase in enrollment. A close look at Berlin, however, shows that enrollment at Buckingham Elementary School has increased 14% between 2014 and 2018. A student body of 487 students in 2014 grew to 556 in 2018.

According to Vince Tolbert, the school system’s chief financial officer, enrollment projections are based on birth rate and grade succession data from the Maryland Department of Planning.

“Over the past four years, our projected September enrollment estimates developed in March have varied less than 1% of the actual Sept. 30 student enrollment,” Tolbert said.

Looking back at the figures from 2014-2018, Tolbert said officials were not surprised by the numbers. He did note, however, that elementary school enrollments consistently exceed the county’s projections. That appears to indicate that students born elsewhere move to Worcester before starting school.

“In 2014, there were 447 births in Worcester,” Tolbert said. “Five years later, our kindergarten enrollment was 470. That leads us to believe there are people moving in.”

The 10-year enrollment estimates based on birth rate and grade succession data from the Maryland Department of Planning are the figures used as officials plan for new school construction. Locally, the school system does monitor expected developments, such as the potentially 700 apartments that could be built on Seahawk Road. 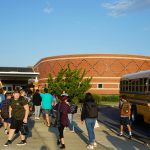 Due to overcrowding forcing the use of nine portable classrooms, Stephen Decatur Middle School is currently being studied for a $9 million addition. Submitted Photo

Tolbert said if the school system incorporated new developments into the projected enrollment figures they submitted to the state, the state would discount anything that was more than a 5% variance from current numbers.

“Our numbers have to be approved by the state department of planning,” Tolbert said. “Anything that varies by more than 5% would be kicked back.”

David Buck, director of communications for the Maryland Department of Planning, confirmed that a significant variance in projections would need to be resolved.

“Planning uses monthly resident recorded birth data from the Maryland Department of Health and converts the monthly births to school year births (September to August of the following year),” Buck said in an email. “These school year births are then projected for the next five years. The birth projections are then used in conjunction with a ‘grade succession’ methodology to derive the 10-year, grade-specific enrollment projections.”

Buck said that while his department used birth and grade succession projections, local jurisdictions could look at additional factors such as building permits and residential development. Nevertheless, he said that didn’t usually result in major discrepancies.

“Overall, in 2018, planning’s projections were within .4% of the number of students that actually showed up statewide, although there are variations by county and by type of school,” he said.

According to Buck, when there are discrepancies between state and local figures state staff would meet with county officials.

“Depending on the data and information provided, Planning may increase our projections to be closer to the county projections or recommend the county to revise their projections,” he said, adding that in 2019 Worcester’s figures and the state’s only differed .25%.

In Worcester County, plans are currently underway for a $9 million addition at Stephen Decatur Middle School. The facility, which at 22 years old is one of the county’s newer schools, makes use of nine portable classrooms. The fact that the school was outgrown essentially as soon as it opened could prompt questions regarding the accuracy of enrollment projections. According to Tolbert, however, the construction of that school did not occur in the usual fashion.

“Part of what happened was the state did not feel there was justification to build a new school,” Tolbert said. “It went to referendum.”

“Ultimately it was approved by our county with 100% local funding,” Tolbert said, adding that the state did eventually provide some after-the-fact funding. “It was built based on the enrollment of Berlin Middle School with room for some slight additional growth. From 1990 to 2000 Worcester County saw huge population growth. Those things combined resulted in the school being built smaller than it should have been.”

“When projecting future school facility needs, it is recognized that Worcester County has been one of the fastest growing counties in the state of Maryland,” the plan reads. “Results of the Census 2010 revealed the county population increased by 4,911 people or 10.6% between 2000 and 2010. The 2010 county population was 51,454.”

“Enrollment pressures in northern area schools should be expected with growth in the general population and residential development,” the plan reads. “Future increases in school populations are also anticipated in the central and southern county when new housing eventually comes on line.”

Smith, who serves as president of the PTA at Buckingham, where his two children attend school, worries that the school system is not doing enough to plan for those enrollment pressures. Smith said the quality of the county’s schools was a draw for his family when they moved here.

“One of the things that makes the schools in Worcester County amazing is the traditionally low student-to-teacher ratio,” he said. “It gives students a more intimate educational experience. They get more one-on-one with the teacher.”

He’s afraid that will change at Buckingham as the school, which already has five portable classrooms, is forced to accommodate more students. According to the latest WCPS Capital Improvement Program, the 41-year-old school is operating at 135% of local rated capacity and 101% of state rated capacity.

“You can see the class sizes getting bigger,” Smith said.

“As part of the annual budget process, our board and leadership team review projected enrollments to make sure adequate staffing is in place at each of our schools,” Tolbert said. “If an analysis of the projected enrollments indicate the need for additional positions, this can be addressed in our proposed budget.”

“Small class sizes are a cornerstone of our success here in Worcester County, as it enables personalized instruction, and it is through support from the county commissioners that we have been able to maintain low teacher-student ratios,” he said. “The desire to keep small class sizes within our schools is shared by our families as well. Every year, we survey parents as part of our budget planning process, and they consistently rank maintaining small class sizes among their top priorities.”