OCEAN CITY — Everything is on the table after another intolerable unsanctioned motorized event had the resort community “under siege” for much of the weekend.

For the record, the official H2O International (H2Oi) car show was held in Atlantic City for the second straight year last weekend, but, as expected, a huge contingent of car enthusiasts hell-bent on wreaking havoc in Ocean City arrived anyway. Throughout the weekend, Ocean City witnessed the same lawlessness and blatant disrespect from the unregistered, unsanctioned participants for the entire community, its police department and allied law enforcement agencies that have long been associated with the event weekend.

As expected, there were thousands of tricked-out vehicles cruising up and down Coastal Highway and other roadways throughout town and thousands more along the sidewalks and in business parking lots egging them on.

When the dust settled and most of the car enthusiasts cleared out by Sunday evening, left in their wake were trashed parking lots and a community still trying to find answers for the challenging problems. In a prepared statement issued on Sunday morning after a particularly raucous Saturday night, Mayor Rick Meehan said what took place in Ocean City over the weekend “can never happen again.” 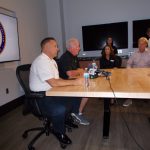 A Monday press conference is held in Ocean City. Photo by Shawn Soper

During a press conference on Monday afternoon, Meehan reiterated his position. The mayor pointed out the well-attended press conference is typically reserved for times when the resort is bracing for a major storm. In this case, the press conference was held in the aftermath of a hurricane of a different sort.

“We did experience a storm this weekend,” he said. “We’re trying to evaluate as much of what happened as possible. It was extraordinary. We all live here and we all experienced the same kinds of things. What we all saw is something we should never see in Ocean City ever.”

Again, to be clear, the official H2Oi event, self-billed as the “laid back” two-day Volkswagen and Audi event, was held in Atlantic City. Typically, participants who officially register for that event are well-behaved car enthusiasts sharing their hobby with like-minded individuals. However, the unassociated and unregistered throng that arrived again in Ocean City last weekend, fairly or not under the banner of H2Oi, wreaked havoc on the resort, according to Meehan.

“This group’s sole purpose is raising hell and that’s just not acceptable,” he said. “We don’t invite people here to terrorize our community. I felt like we were under siege and the residents and visitors felt fear at some of the things they were seeing and we shouldn’t have to accept that.”

Meehan thanked the Ocean City Police Department (OCPD) and its allied law enforcement partners including the Worcester County Sheriff’s Office, the Maryland State Police, Maryland Natural Resources Police and others for their assistance.

“Even though it was not pleasant out there, the residents and visitors were safe thanks to our police department and the allied law enforcement agencies,” he said. “I dread to think what would have happened if they weren’t here.”

In terms of the size of the police presence in Ocean City over the weekend, OCPD Chief Ross Buzzuro said it was the largest ever for any event in the resort.

“Without going into specifics from an operational standpoint, we had the highest number of officers working in Ocean City at one time than at any other time in history,” he said.

After a particularly troublesome motor vehicle special event season a few years ago, a task force was created to begin exploring ways to combat some of the illicit behavior. Borne out of those early task force meetings was the creation of a special event zone during some of the events with lower speed limit, higher fines and stronger enforcement efforts among other initiatives. While the special enforcement zone has worked to some degree and the police presence in the resort was the strongest it has ever been, the event over the weekend was perhaps the worst it has ever been, forcing resort officials to go back to the drawing board.

“We all have to work together with one voice,” said Meehan. “Everything will be on the table as we begin to discuss what to do about this. Some things might cause inconveniences for residents and businesses, but we need them to be on board with some of these things and I believe they will. We are not going to let what happened define Ocean City.”

Buzzuro agreed everything is on the table going forward. The chief reported there were 121 arrests over the weekend for a wide variety of charges. Indeed, a review of the arrest logs for the weekend revealed few if any major, or part 1, crimes with hundreds of lesser crimes including disorderly conduct and disturbing the peace, for example. Oddly, there were very few drunk-driving arrests although the group in town last weekend, by and large, is not typically known for its alcohol consumption.

“It was intolerable,” Buzzuro said. “The level of disrespect has never been seen. It was very taxing and very challenging we were fortunate there weren’t any significant injuries because there was a lot of anger and hostility directed at law enforcement.”

Buzzuro said there is little that can be done to keep the group from coming to Ocean City in the future. In the meantime, every avenue will be explored to at least make their visit more palatable for residents and visitors.

“We are not going to be able to keep this group of people away,” he said. “We have to figure out ways to mitigate this and nothing is off the table. We’ve seen it escalate over the years and it isn’t going away.”

Throughout the weekend, there were reports of law enforcement officers being assaulted with rocks and bottles and other scuffles with participants. In one particular case, a fairly viral video shows a law enforcement officer resorting to tasing a suspect. Buzzuro said his officers and their allied partners used a variety of techniques in an effort to maintain some semblance of control

“There are a lot of different tactics we use to maintain control,” he said. “There were literally thousands of motorists on the roadways committing violations and thousands more egging them on.”

In another well-circulated social media post, law enforcement officials are seen drawing their weapons on suspects. Buzzuro said that was not an isolated incident.

“We did have some instances of officers drawing their weapons,” he said. “There is a review process and all of those incidents will be reviewed.”

Buzzuro said many law enforcement officers were dinged up during the weekend donnybrooks with event participants, but there were no major injuries.

“For the most part, everybody is okay,” he said. “We’re a little bruised up and sore, but there were no significant injuries.”

“They all want to help,” he said. “They all recognize this is a situation Ocean City needs help with.”

Buzzuro said going forward resort officials will likely return to Annapolis to urge state lawmakers to strengthen enforcement of some violations such as reckless and negligent driving, for example. A similar bill seeking to strengthen the special event zone parameters was denied by the General Assembly during the last session, but after this weekend’s disturbing event, state lawmakers might be more receptive to the proposed changes.

“Some vehicle laws don’t rise to the level of being a deterrence,” said Buzzuro. “A good bit of the bad behavior was on the roads. We need to dig deeper into some of these offenses and see how they can be strengthened or enhanced.”

At any rate, it will likely take a concerted effort by the city and its partners, including local residents and business owners, to affect real change. Meehan said despite some businesses reporting successful weekends, there appears to be a will make changes to avoid a repeat of last weekend’s events.

“Some of our businesses were very busy and many have said it just wasn’t worth it,” he said. “What we’re hearing from our business community is that they stand behind everything we’re trying to do with this.”