That figure, as well as statistics on AP (Advanced Placement) course enrollment and the future aspirations of graduating students, was included in a report from Amy Gallagher, the school system’s coordinator of accountability and assessment, to the Board of Education last week.

“This is a huge increase, which is very exciting,” Gallagher said. “Our graduates were offered $17 million in merit based scholarships. They accepted $6.2 million of that $17 million offering, the reason being many times the same students is offered multiple scholarships and they can only accept one based on where they attend school.” 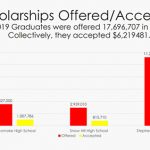 Gallagher said interest remained high in the AP and dual enrollment programs offered. More than 51% of Decatur students took part in AP courses. More than 40% of Pocomoke and Snow Hill’s students were enrolled in AP courses.

She said more students were also participating in dual enrollment programs. More than 30% of Decatur students did in 2019.

OCEAN CITY — When the current pandemic wanes and Ocean City’s summer season ramps up, resort area employers can expect an influx of summer seasonal workers on J-1 work and travel visas, but there are many uncertainties including how many will come.Each summer, an estimated 4,000 foreign student summer workers arrive in Ocean City to… Read more »

At Least Seven More Foals Expected On Assateague This Year

ASSATEAGUE — The birth of a new foal on Assateague Island last month is the first of what should be many this year on the barrier island.In late March, a new foal was born to the herd of wild horses on the Maryland side of the Assateague Island National Seashore. The mare is Mieke’s Noe’lani… Read more »