OCEAN CITY –  Worcester County Public Schools encouraged educators to get excited for the new school year with a kickoff celebration this week.

“When I look out here this morning, the first thing that comes to mind is ‘wow,’” said Bill Gordy, president of the school board. “Even though we are in our third year of this kickoff event, I’m always amazed at the level of excitement and pride that each of you bring to this arena.”

Taylor thanked elected officials for their support of the local educational system and instructed those in the audience to remember what their true purpose was as educators.

“The real reason we’re here is for the 6,700 kids that will enter our schools on Tuesday,” he said. “Last year I talked about making it magical. This year, I’m going to talk about the sky being the limit and making a difference.” 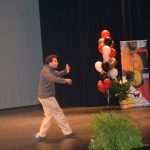 Featured speaker Patrick Briggs said, “… we as educators, we’re the most powerful people on the planet.”

Taylor recounted experiences from his time as principal of Stephen Decatur High School. He talked about a mentoring program he’d started and how it had shown him the barriers some students faced in their lives.

“We’ve got intelligent, smart, gifted people in this audience who can make that difference …,” he said. “We’ve got to get inside of these kids because they deserve that. We remove those barriers and the sky will be the limit.”

Briggs, the keynote speaker for this year’s kickoff event, is a director of AVID, a nonprofit that promotes a student-centered approach to teaching. He spoke to the crowd about what he’d learned as a middle school science teacher in Texas and how he believed achievement gaps were actually opportunity and expectation gaps. He said he hated the term “achievement gap.”

“It is a label this country slaps on people like me,” Briggs said, adding that he’d grown up in inner city Houston. “I can give you 50 reasons why I should be dead or in prison. I’m a statistical anomaly.”

He said the achievement gap didn’t exist for him because he’d met great educators. 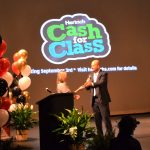 Fred Hertrich of the Hertrich Family of Automotive Dealerships is pictured presenting Teacher of the Year Gina Russell with keys to a car she gets to drive during the school year.

“That’s why we as educators, we’re the most powerful people on the planet,” he said.

Briggs also talked about efforts to improve student behavior. He said half the country’s prison population would be back in prison within three years of being released.

He stressed the importance of building relationships with students. He said the issue with programs like in-school suspension was the fact that the students would eventually return to class and teachers would still have to deal with their behavior.

“You going to work on relational capacity or write him up again?” Briggs said.

He added that punishment might modify an individual’s behavior when the punisher was present — such as the way motorists slow down when driving by a police car — but said it wouldn’t change their overall behavior.

Tuesday’s back-to-school kickoff culminated with a presentation by Fred Hertrich of the Hertrich Family of Automotive Dealerships. Hertrich presented Gina Russell, the 2019 Worcester County Teacher of the Year, with the keys to a new car she’ll have the use of this year. The company will also be giving away $25,000 in regional classroom grants.

“Our company supports educators because the majority of our team, including myself, benefited from a public education on the Eastern Shore,” Hertrich said. “We invest in you because you invested in us. We want to recognize your hard work and sacrifice. We know a strong education system means a strong community.”