OCEAN CITY – The coastal region will be filled this weekend with Jeeps for one of the area’s fastest growing special events.

Ocean City Jeep Week and its signature early-morning beach crawls are back for summer 2019, bringing thousands of attendees and their Jeeps to fill the resort.

“Ocean City Jeep Week is really all about the Jeeps, the people that drive them, the vendors and the public. Even during setup this week, it became obvious that this is a group unlike any other in the motorsports world,” said event director Brad Hoffman.

As packet pickup started to kick in at the Roland E. Powell Convention Center, Hoffman reporting seeing people from different states all coming together to celebrate the Jeep, its culture and what it means to them.

Down at the Beach Sand course, crews were busy north of the Wicomico Street pier completing the setup. Doug Thompson, Jeff Pruitt and Karen Schreider were busy filling water barriers, laying out the course in the sun and with big smiles on their face. 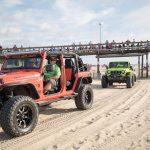 Jeep Jam in Pittsville at the MAYS Sports Complex will be organized by Hoffman’s partner, Chris Cropper, working alongside the course architect, John DeForest, and Chris Russell from Superior Contracting, along with the whole CC Customs crew. They’ve been working months to create the ultimate off-road masterpiece that can challenge the most avid four-wheeler in their Jeep while still having a course that a stock Jeep could enjoy, according to Hoffman.

The big tractor-trailers have been rolling all week into the Roland E. Powell Convention Center, which is known this week as event headquarters.

“We saw KICKER’s big rig, the XRV, blowing into the parking lot, alongside others like Bully Frog, Quake LED, Alpine, Sound of Tristate, and of course i.g. Burton Jeep Berlin showcasing their newest Jeeps, not to mention 50-60 other major vendors setting up,” said Hoffman.

While the daytime activities make the event special, Hoffman said a welcoming party is planned at the Clarion Hotel on Wednesday and on Thursday there will be a huge kick-off big event at Fish Tales, where owner Shawn Harmon and his team allow the Jeeps to take over the parking lot and showcase what they’re all about. On Friday, Jeep Week evenings are all about the Clarion and then The Greene Turtle for a Jeep Week show that night. At 10 p.m. on Friday night, Ponzetti’s will feature a reggae night with King Schascha featuring Black Dog Alley, returning to Ocean City after a successful run at the first Jellyfish Festival.

On Saturday night, the fun continues at Hooters of West Ocean City with an LED Light Show and competition, featuring returning champion Stephan King, who will be challenged by upstarts showing off their light displays in the parking lot.

On Sunday, from 1-4 p.m. title sponsor i.g. Burton Berlin Jeep will host a sendoff party at the dealership in Berlin with an open house, show and shine.

“Like the rocks in the rock garden at Jeep Jam,’” Hoffman said, “the Jeep community are my rocks, so they can have one last ultimate Jeep vacation for summer 2019. They wait all year for this so we can put on one great big party.”
For more information, click over to oceancityjeepweek.com.