In his senior year of high school, he was involved in a car accident that left him paralyzed. Once a star football player with the opportunity to play for any college in the country, Alexander was left to find his purpose in life.

“The difference between the successful and unsuccessful is the thinking gap,” he said. “The way you view things drives the way you do things.”

Today, Alexander dedicates his life to motivating and inspiring others. It was his incredible story, and his message on leadership and perseverance, that stood out at Worcester County Public Schools’ inaugural Rise Up Huddle event this week.

“Tonight, we have athletes from all over Worcester County,” Stephen Decatur teacher Amy Fenzel-Mergott said. “All of you have taken time from your training to be here. Hopefully you think of tonight as mental preparation as we embark on a new sports season in school.”

Fenzel-Mergott, who organized this year’s inaugural Rise Up Huddle, said Monday’s event provided student athletes from each of the three high schools the opportunity to come together and support one another. She also shared some of her fondest memories playing against and rooting for friend and longtime Pocomoke High School girls’ basketball coach Gail Gladding, who passed away earlier this month.

“Although Gail and I were rivals, we were great friends,” she said. “Yes, we played each other, and it was a battle sometimes and we wouldn’t talk for a couple of days afterwards. But we supported each other. Whenever we would play teams like Mardela, Parkside, or Kent Island, we would always have each other’s back … My hope is that each of you will look for opportunities to support each other.”

Superintendent of Schools Lou Taylor told students that athletics shaped his own high school experience and made the difference in both his personal and professional life. He also recognized Stephen Decatur football coach Bob Knox for his mentorship.

Taylor wished the student athletes a great sports season and challenged them to dedicate themselves.

“Decisions are made about your future on those athletic fields,” he said. “People will remember years from now how you behaved, how you represented yourself, and it will make a difference in your careers and in your lives. Represent your school, represent your family and represent yourself as an individual. If you work hard and dedicate yourself, you are going to have a successful season.”

As the keynote speaker, Alexander also shared his testimony with the student athletes.

A native of Birmingham, Ala., Alexander attended Erwin High School and was ranked the No. 8 high school football player in the state. But his life changed in October of 2006, when he was paralyzed in a car accident.

“I went from walking one day to rolling the next,” he said.

Alexander also recalled those months following his accident, relearning how to read and sit on the edge of a bed, among other things. Despite three suicide attempts, Alexander told students he soon found the support of family, doctors, coaches and teachers.

“When I focused on what I couldn’t do, it caused my life to go downhill,” he said. “But when I started focusing on what I could do, my life began going up.”

Alexander quickly set his mind on completing high school and going to college. After graduating from Erwin in 2007 and Wallace State Community College, he enrolled at The University of Alabama at Birmingham (UAB), where he double majored in criminal justice and communication management.

He told students it was there that he became the first paraplegic to receive a football scholarship and join the team as an honorary player. He also championed the movement to reinstate the school’s football, bowling and rifle programs after they were cut in 2014. 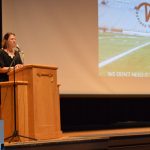 “I challenge you to volunteer yourself every day,” he told the students. “If nobody on your team will do it, you do it.”

After finishing his undergraduate career, Alexander went on to complete a master’s degree in communication management from UAB. His proudest moment came on July 18, 2016 when he was able to stand up on his own for the first time since being paralyzed. The video of him standing went viral, catching the eye of ABC National News, TMZ Sports, and other news outlets.

“For the last 13 years, I’ve been going to bed with the expectation I will wake up in the morning and will be able to walk,” he said.

He told students he hoped his story would teach others to believe in themselves and to practice discipline and perseverance both on and off the fields and courts.