BERLIN – For three weeks in July, the Summer Theatre Program at Stephen Decatur High School took on 65 students, ranging from rising third graders to rising eighth graders, to teach them the fundamentals of acting and production.

Even at the height of summer vacation, Stephen Decatur High School was peppered with small cohorts of students running lines, hashing out scenes and handling cameras.

In the chorus room, a circle of third and fourth grade students, buzzing with energy, displayed their newly honed improvisation skills with scene practice.

During the three, one-week sessions of the Summer Theatre Program, students studied improvisation, script writing, editing and acting as well as the works of Greek playwrights and William Shakespeare.

Weeks, a rising eighth grader at Stephen Decatur Middle School, has attended the summer program at the high school for three years. Classmate Olivia Mazza has attended the program the last four years.

Though this is the final year in the program for Weeks and Mazza, both plan to continue with the drama programs in middle and high school and volunteer with the Summer Theatre Program as high school students.

“I feel like this camp is my safe place,” Mazza said.

“I’m going to miss the teachers, hands down,” Weeks said. “They’ve, like, raised me. This is my second home.” 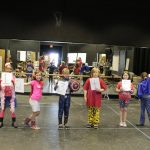 Weeks and Mazza both view theatre as an outlet for expression. Both girls have participated in Ocean Pines Children’s Theatre, the Red Doors Community Center and school productions.

The Shakespeare class was Weeks’ favorite. This year the students ran scenes from “Hamlet.”

“The shows are much more mature,” Weeks said.

Not every student, however, wants to be on stage. Charlotte Haskell, a sixth grader in her third year with the program, preferred handling the camera to being in front of it.

During the first session, Haskell co-wrote the script for a short film “The Magic Pencil” with fellow program participants Ellie Zollinger and Ruby Manos.

Throughout the three sessions, camp participants wrote, directed, acted in and edited their short films.

The students’ short films were part of the last session’s “informance,” or informal performance, to which the parents were invited to see what their children had learned that week.

Though the Summer Theatre Program has been a mainstay of the SDHS drama program, it has undergone major structural changes since Cater became high school drama teacher.

Before starting as the drama teacher at SDHS in 2015, Brandon and Megan Cater taught at Imagination Stage, a theatre arts organization in Bethesda.

“The philosophies we picked up at I Stage, we really wanted to incorporate,” Cater said.

The focus on process and soft-skills that the Caters learned at Imagination Stage has become a core principle of the Summer Theatre Program.

The program is no longer audition based and no longer culminates in a single performance.

“This is something that is open to everybody,” Cater said. To Cater, it is important that students have the opportunity to learn communication, acceptance and teamwork through the theatre arts.

Inclusivity, said the Caters, is a priority of the program. Fifteen percent of students in the program received either a full or partial scholarship in order to attend the program. The funds for the scholarships come from local businesses and foundations.

Since beginning in 2015 with 25 students, the Caters have seen the program expand every year. 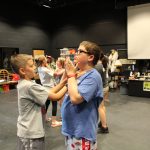 Wofford, the former camp manager, joined as a teacher this year in response to the growing number of students participating in the program.

In addition to the four teachers and four high school volunteers, the Caters brought on recent graduates Sarah Bianca and Marissa Wheaton as interns. Together Bianca and Wheaton developed three new classes beyond just acting for the seventh and eighth grade students — stage makeup, sound design and choreography and creating a villain.

“The Caters have given us a lot of flexibility,” Wheaton said. With that trust to design their own classes, Wheaton and Bianca broadened the focus on their classes beyond just acting.

“At this age, it’s really important kids are getting arts education,” Megan Cater said. “We think summer camp should be about fun and not about stress.”

“They want to be in a creative space where they can’t make a wrong choice as long as they’re engaged,” Brandon Cater said.