OCEAN CITY — A Pennsylvania man faces over 40 charges this week after allegedly fleeing from police on his motorcycle at a high rate of speed and colliding with an Ocean City Police Department (OCPD) officer and a patrol vehicle.

Around 10:50 p.m. on Saturday, OCPD officers were conducting an investigation of an unregistered motorcycle parked illegally on Talbot Street near Philadelphia Avenue. A check of the unattended motorcycle’s tags revealed it was not registered and a tow truck was requested to transport the vehicle to the Ocean City impound lot.

While OCPD officers waited near the motorcycle for the tow truck to arrive, they were approached by its owner and operator, identified as Wilmer Zook, 23, of Quarryville, Pa., who exhibited signs of intoxication, according to police reports. OCPD officers explained the motorcycle was going to be impounded because it was not registered and Zook offered to disengage the vehicle’s transmission to facilitate the towing process. 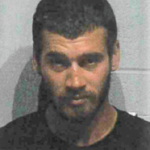 Zook mounted the motorcycle to disengage the transmission from the parking gear, but instead revved it up and began accelerating away from the OCPD officers on the scene. According to police reports, Zook drove straight toward an OCPD officer, striking her in the arm with the motorcycle, despite having ample room to avoid her. Zook also struck an OCPD vehicle as he accelerated away from the scene. The collision caused superficial damage to the OCPD vehicle and the officer was not seriously injured.

OCPD officers pursued Zook and apprehended him in the area of Somerset Street and Baltimore Avenue where he was placed under arrest. Zook reportedly told police he had consumed one pitcher of beer over the course of two hours at a downtown bar, although he exhibited signs of intoxication, according to police reports.

At the Public Safety Building, Zook reportedly refused to submit to an alcohol concentration test, instead lying his head on the table and closing his eyes as officers spoke to him, according to police reports.

Zook was charged with 44 total counts including driving while impaired and under the influence, assault, obstructing and hindering, fleeing and eluding, reckless and negligent driving and numerous traffic citations. After a bail review hearing on Monday, he was ordered to be held without bond.