“I’ve got a couple of emails from people saying they love this idea …,” he said. “Then Mark Paddack on the council brought it up and said we should consider this.”

The installation – called “Goby Loves Plastic” – uses metal framing and mesh to form a large, transparent sculpture of a fish. The idea is to collect waste from the beach by encouraging visitors to “feed Goby” by throwing their empty plastic bottles in the fish’s mouth.

While she said the art installation was a unique concept, Blazer shared Public Works Director Hal Adkin’s concerns with the committee.

“I did present this to Hal, and Hal had a whole bunch of questions,” she said. “Who’s going to clean it out? Where is it going to go? What’s it going to do?”

Blazer, however, said it was ultimately up to the Green Team to decide if it wanted to explore the project.

“We have to figure out who’s going to maintain this and dump it,” she said.

Many members of the committee questioned if other U.S. cities had implemented the “Goby Loves Plastic” initiative. Sandi Smith, development and marketing coordinator for the Maryland Coastal Bays Program, noted that pictures showing the sculpture were taken from other countries.

“My curiosity was if a municipality somewhere in this country was doing this, how are they maintaining this?” she said. “There are a lot of flaws to this design.” 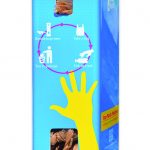 An example of a BlueTube Single unit is pictured.

Smith said she was concerned the sculpture would attract unwanted waste and littering. She also noted the potential smells that could emanate from the bin.

“If people are walking by, they are just going to throw stuff in there,” she said. “That’s what worries me.”

However, Smith argued the project could complement beach festivals.

“If it were economical to do it at festivals, like Jellyfish, that’s a fun thing to chunk stuff in,” she said.

Committee members questioned if the sculpture could be purchased and how much it would cost. DeLuca said another hurdle was finding a way to maintain the installation and empty the bin each day.

With no further discussion, the committee agreed to share its questions and concerns with Adkins and the public works department.

“If Hal can’t find the answers to those questions, it’s dead,” he said. “Until that happens, it’s just a fun idea.”

The committee last week also discussed another waste reduction initiative that uses plastic bags to encourage beach goers to pick up their trash.

“It’s called BlueTube,” Blazer said. “It’s basically a blue container people put plastic bags in and others can take one and use it pick up litter.”

Committee members, however, questioned if plastic bags would remain in the containers.

“We are all about source reduction,” DeLuca said. “Why would we put this somewhere where it can blow away?”

Instead of a town-initiated project, Blazer said residents wishing to improve their street ends could use the concept.