OCEAN CITY – With thousands of burger combinations, an expanded menu and major renovations, a new management company is eager to make its mark on a well-established resort eatery.

Located on 126th Street in Ocean City, The Abbey Burger Bistro has served locals and visitors alike since 2013.

But since the beginning of the year, business partners at Matt Ortt Companies have been busy preparing for their first season of management at the Ocean City location.

“It was run by the group that started The Abbey Burger, but most of their focus has been across the bridge,” said Managing Partner Matt Ortt. “So they looked for a company like us that could come in and manage the restaurant.” 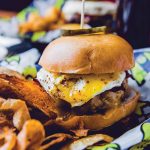 One of the signature burgers on The Abbey Burger Bistro menu.

Since 2008, The Abbey Burger Bistro has developed a reputation as a unique burger joint that specializes in eclectic meats and tons of toppings. Today, the restaurant has three locations – Federal Hill, Fells Point and Ocean City – and has been voted Maryland’s best burger by USA Today multiple times.

In Ocean City, chef and Managing Partner Stuart Diepold said he is eager to showcase the remodeled restaurant and growing menu.

“We’ve done a lot of things here,” he said. “The first thing we’ve done is expanded the bar and seating inside the bar area. We’ve also expanded the menu.”

“We didn’t change their concept or theme,” Ortt said. “But we took their blueprint and ‘Ocean City-fied’ it.” 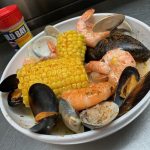 A seafood dish on The Abbey Burger Bistro menu.

Customers can also create their own burger using the “Build a Burger” checklist, which includes toppings such as peanut butter, habaneros and house-made sauces and a selection of exotic, hand-pattied meats like bison, Kobe beef, camel, lamb and more.

“It’s 100% customizable,” Diepold said. “You aren’t going to find a camel burger or a shrimp burger anywhere else.”

“Usually the chef decides what goes on each and every dish,” he said. “Here, the guests get to decide for the most part what comes with it.”

Patrons can also choose among the 60-plus varieties of bottled and draft beer and a selection of adult milkshakes, including a Berger Cookie Milkshake with vanilla vodka and Godiva liqueur and a Cinnamon Toast Milkshake with RumChata and cinnamon whiskey. Non-alcoholic milkshakes are also available.

“The menu really has something for everybody,” Diepold said.

Since re-opening in May, Ortt said sales have grown and both new and returning employees have learned how to work together to make the restaurant a success.

Diepold added that nearby events at Northside Park only improve business.

“With everything that happens at Northside Park, it translates to very good business over here,” he said.

But Ortt said the company does not plan to stop there. After years of managing restaurants, the team hopes to expand its portfolio by building a restaurant of their own.

“Our next project, our sixth location, will be owned by us and only us,” he said. “The Matt Ortt Companies will be opening a new restaurant on the Boardwalk in April 2020.”

Ortt said the company has teamed up with The Harrison Group to lease space from the Quality Inn on 16th Street. The new restaurant, Black Salt Bistro, will include a raw bar, open patio, pool bar and more.

“All the paperwork has been signed, and we start construction in November,” he said.

Ortt explained that passion is a driving force behind the company’s success.

“If you are passionate about what you do and look at every person as a guest coming to a party, you make 99.99% of them happy and coming back,” he said. “That’s all we’ve done. There’s no secret to our success. We put in the time and effort and care about what we do.”

The Abbey Burger Bistro is currently open from 11 a.m. to 11 p.m. daily. For more information, visit www.abbeyburger.com/ocean-city or the restaurant’s Facebook page.

“It is definitely a one-of-a-kind restaurant,” Diepold said.