Last weekend, the Jellyfish Festival made its debut on the beaches of Ocean City.

For three days, the festival combined live music with action sports, family-oriented activities, and arts and crafts in a special event that took place in and around Jellyfish Tentacle Village from Somerset Street to North Division Street.

Producer Brad Hoffman said he was pleased with this year’s inaugural event.

“I can’t thank everyone enough …,” he said. “Everyone put in a lot of effort to make sure this was going to be a success, and it was.”

Despite breezy conditions on Friday – which postponed performances by the Monster Energy Freestyle Motocross Team – Hoffman said the remainder of the weekend was highlighted by nice weather.

“It couldn’t have been any better,” he said. “I think mother nature definitely smiled down on us.”

Before festivities officially kicked off, organizers honored police, firefighters, paramedics and servicemen and women in the armed forces with a First Responders Day on Thursday.

And by Friday, Hoffman said the Jellyfish Festival was well underway.

“I feel it started off with a great rhythm,” he said. “The village came to life, there was a good crowd and the weather cooperated.”

“They all brought the wow factor …,” he said. “To have all three of those things in one weekend is something unheard of, and I think we did it well.”

While final numbers have yet to be tallied for the ticketed events, Hoffman estimated between 5,000 and 6,000 people came through Jellyfish Village each day.

“Sunday was better than Friday,” he said, “and Saturday was an over-the-top success.”

“Perception is a lot for an event like this,” Hoffman said. “The perception I gathered was that it was a great event, it brought people in that spent money and it was family oriented.”

Melanie Pursel, president and CEO of the Greater Ocean City Chamber of Commerce, said she was there all three days of the festival. She noted that she saw many families enjoying the live music, vendors and activities.

“I think the format was great and weather was gorgeous,” she said. “Since it was a first-year event, attendance was not as much as we would have liked for the concerts, however I see great potential moving forward.”

And while attendance was lower than anticipated, Pursel praised the festival, as well as the business that came with it.

“We applaud everyone for their tireless effort in pulling off this unique event, it is a perfect fit for Ocean City,” she said. “The Boardwalk merchants did great all weekend as well.”

Hoffman said one of the goals of the Jellyfish Festival is to fill the void left by the Dew Tour, a popular multi-sport event held in Ocean City from 2011 to 2014.

“That’s been my goal all along, economic development and filling a hole that existed in June.” 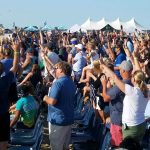 The crowd is pictured on Sunday at the Jellyfish Festival.

With the first year of the festival now behind them, Hoffman said the promoters will spend the coming weeks reviewing the layout and entertainment in preparation for next year’s event.

“We have to now get analytical and see what did go well and what didn’t and tweak things from there,” he said. “But I say 90% of it went really well.”

“I always said this was an idea I helped create, but the sea of people that worked on this were significantly important in making this festival a success,” he said. “It was like everyone came together to raise this thing up from the sand.”