BERLIN –  A controversial apartment project is expected to move forward on Route 346 after receiving approval from the Berlin Planning Commission.

After multiple meetings and lengthy discussion, the commission voted 4-3 Wednesday to approve changes to the Purnell Crossing planned unit development (PUD). The split vote came after several citizens voiced opposition to the project.

“This is a map to destroy what Berlin is now,” Austin Circle resident Wayne Harrison said.

In March, landowner Troy Purnell and builder Justin White presented plans to modify the Purnell Crossing PUD. Instead of the previously approved mix of townhomes and assisted living space, White presented plans for a variety of rental apartment buildings. Area residents voiced countless objections, and in the months since, White and Purnell have met with concerned neighbors and tweaked their proposal.

Purnell added that the already approved PUD, which was approved more than a decade ago, included a four-story assisted living building as well as two 60-plus unit buildings. He said the assisted living facility had a 50% larger footprint than the 36-unit apartment building shown on the new plan.

“We need some monumental trees,” he said.

Commission member Barb Stack said that altering the PUD by replacing an assisted living facility with apartment buildings was a drastic change.

Cosby said what made Berlin special was the fact that it didn’t look like just any other town.

“I’m not against this I’m trying to find a reasonable compromise,” he said.

Purnell said he didn’t object to improving the plan.

“I don’t think anybody has a problem making this look as nice as we can,” he said.

Commission member Newt Chandler, who previously expressed concern regarding the potential for Section 8 housing, asked if the developer was willing to stipulate that subsidized housing would not be a part of the project.

Mark Cropper, Purnell’s attorney, said that could be a condition of the PUD.

Chandler also wanted to know if occupancy limits could be placed on the proposed two- and three-bedroom apartments. Planning Director Dave Engelhart said that was already addressed in the town’s code.

Cropper said the commission should consider White’s proposal compared to what was already approved for the PUD — assisted living and apartment buildings — and determine whether it was better or worse.

“It’s not better in my mind,” Planning Commissioner Ron Cascio said, adding that he was afraid Berlin was getting more and more pods of large development on the outskirts of town.

Cropper said the planning commission had already approved development of this property years ago when it approved the PUD. He said he thought White’s proposal was more in keeping with the town’s character than an institutional assisted living facility.

Stack and Cascio expressed concern that apartment buildings would mar the Route 346 entrance to Berlin. 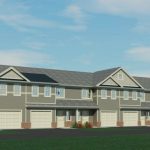 A rendering of a building of townhouses is pictured.

Purnell said the PUD that had already been approved included two 60-plus unit apartment buildings on the site. He said they were four-story structures that included a parking garage underneath.

When the commission asked for public comment, residents of the Purnell Crossing townhouses and Austin Circle said they opposed the project. Harrison said it would change Berlin dramatically. He said he wasn’t opposed to development there but thought it could be done in a smarter manner with better setbacks and buffering.

“I think they have the ability to do it the right way but the plan is not there,” he said.

Purnell Crossing resident Ruby Halligan said she wanted the PUD to be developed in the manner originally approved. She said putting apartments there would add to the already heavy traffic at the intersection of Route 346 and North Main Street.

“I feel the project does not fit the character that was planned and promised to us,” she said.

Halligan said concerned homeowners had made an effort to hire an attorney to fight the project but hadn’t been able to do so. She said they’d contacted 13 lawyers and they’d all declined to take the job. All but two of them cited conflict of interest as their reason for declining, she said.

Mitchell David, a resident who spoke against Oceans East when it was approved, told officials that the text amendment allowing 36-unit apartment buildings in town — which was introduced prior to Oceans East being built — had opened Pandora’s box. He said the sight line of an assisted living building would be better than that of apartment buildings.

“In my opinion this is the wrong place for this type of project,” he said.

Other residents said Berlin’s quaintness was what had led them to buy homes here.

“You can’t have quaint and a three-story building,” Ray Nornes said.

Decatur Street resident Samantha Pielstick was the only member of the public to speak in support of the project. She said she knew several people who’d been unable to find places to rent in Berlin. She said that while many people viewed those who lived in apartments as constant renters, that was not necessarily the case. She said sometimes they just needed to establish time in their job in order to get a mortgage or found themselves in need of a temporary place to live as they went through a divorce.

“There’s not a lot of rentals in and around Berlin,” she said.

Cropper said he knew those who objected to Purnell’s plans were sincere but pointed out that their concerns were the same ones presented by neighbors of any project.

“I did the approval for this project,” he said. “I did most of the approvals for Ocean Pines. Every single hearing I’ve ever done for a PUD approval, new residents of the last project came and fought and opposed the new project. They were just as sincere as every one of these people but it is normally what happens.”

Chris Denny, chairman of the commission, questioned whether there’d been any developer interest in the PUD as originally approved. Purnell said if he could have sold it he would have.

Denny said he felt the project was being ramrodded through and thought that White was just planning to flip it.

“If I lived there I’d be sitting out (in the audience) right now,” he said. “I don’t know any better way to state it. If I’d lived there for 10 years, I think it sucks … I think there’s plenty of people that would purchase townhomes.”

Stack said she preferred the original PUD to the proposed changes. She said she thought that considering the demographics of the area, there would be a need for more assisted living facilities.

Purnell said one was already being built in Ocean Pines.

“I need to address a little history,” he said. “I’ve had the property sold three times in the past 12 years with $10,000 nonrefundable deposits. I’ve kept every one of them because, when they go to do the market study, it says there is a not a need and they cannot get the financing they need.”

Though Denny’s request for a motion one way or the other regarding the PUD alteration was initially met with silence, Cosby eventually made a motion to approve the project albeit with a variety of conditions. He said he wanted to see additional landscaping, particularly at the west end of the project, as well as elevation of its sign, a sidewalk in front of the property, no subsidized housing and no banner signs. He said that a final condition of the approval would be Purnell’s agreement to decrease the size of the two 60-unit buildings already incorporated into the PUD.

“No four-story apartment buildings will ever be built in the PUD,” he said.

The motion passed 4-3 with the support of Cosby, Chandler, John Barrett and Phyllis Purnell. Denny, Cascio and Stack voted in opposition.

Halligan insisted on making one final statement to the commission.

“How can any person, resident of this town, ever feel comfortable with the approvals of the town if they’re subject to change?” she said. “Troy has won again.”