OCEAN CITY – The 2019 OC Air Show will showcase a variety of military performers when it returns this weekend to Ocean City.

Although the event is headquartered with multiple attractions on the beach at 16th Street, the acts booked for this year’s air show can be seen all over Ocean City. All major acts will perform Saturday and Sunday with the schedule of performances beginning at noon and ending around 4 p.m.

The U.S. Navy Blue Angels will headline the event, which will also include the Canadian Armed Forces Snowbirds for the first time ever.

The Blue Angels team is the U.S. Navy’s flight demonstration squadron with aviators from the Navy and Marines. The Blue Angels team was formed in 1946, making it the second oldest formal flying aerobatic team (under the same name) in the world, after the French Patrouille de France formed in 1931. The six demonstration pilots fly F/A-18 Hornets in more than 30 shows at various locations throughout the United States each year, where they still employ many of the same practices and techniques used in their aerial displays from their inaugural 1946 season.

The CAF Snowbirds fly the Canadair CT-114 Tutor, a Canadian-built jet that was used by the Canadian Forces as a basic pilot-training aircraft from 1963 to 2000. The Tutor weighs approximately 7,170 pounds and is powered by a J-85 engine producing 2,700 pounds of thrust.

The team, which performed last year in Ocean City in a rare mid-week stop, consists of approximately 80 Canadian Forces personnel, 24 of whom comprise the show team that travels during the show season. The Snowbirds’ demanding schedule is met through the dedicated teamwork of not only the 11 military pilots and technicians, but also the entire home team. The CAF Snowbirds leave their home base in Moose Jaw, Saskatchewan and travel to Comox, British Columbia in April each year for about two weeks to practice over different terrain. Starting in May until mid-October, the team travels across North America performing at various air shows. On average, the team will fly approximately 60 air shows at 40 different locations during a single season across North America. 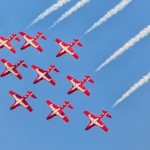 “We’re excited the Snowbirds will be at the OC Air Show for the first time ever,” said Bryan Lilley, president of the OC Air Show.  “Show attendees can definitely expect a great performance.”

The show will also feature two A-10 Warthog Thunderbolts from the 175th Wing of the Maryland Air National Guard. They are scheduled to do flyovers on both show days.

The A-10 Warthog or Thunderbolt II is a single-seat, low, straight-wing aircraft. The design of the wing allows short takeoffs and landings from primitive airfields. Because of this, the A-10 can operate nearly anywhere and provide ground troops with close air support.

There will also be an appearance by the C-5M Super Galaxy from the 436th Airlift Wing based at Dover Air Force Base in Delaware. The C-5M will fly on one day only – Saturday, June 15.

The C-5M Super Galaxy is the largest transport aircraft in the U.S. military and one of the largest in the world. The C-5M is a modernized version of the legacy C-5 and is operated by the U.S. Air Force. There are 52 C-5Ms in the fleet that are stationed at Dover Air Force Base, Del.; Travis AFB, California; Lackland AFB, Texas; and Westover Air Reserve Base, Mass.

The U.S. Coast Guard out of Atlantic City, N.J. will also stage a search and rescue (SAR) demonstration, which will spotlight how the Coast Guard performs an out-the-door water rescue of a person in distress from an HH-65 Daphine helicopter hovering overhead.

The U.S. Air Force F-16 Viper Demo Team will also be performing. The team’s F-16CM Fighting Falcon, affectionately known as the “Viper,” is a single-seat, multi-role fighter with the ability to switch between an air-to-ground and an air-to-air role at the touch of a button.