That’s what owner and operator Zev Sibony said patrons can find at the new Taphouse Tavern.

Located within the Bayside Plaza on 137th Street, Taphouse Tavern is the newest location of the Taphouse Bar & Grille brand.

Since 2010, the Sibony family has grown the Taphouse brand to include locations on 4th, 9th and 45th streets in Ocean City. And about a year-and-a-half ago, Zev Sibony said he began scouting properties in north Ocean City and West Ocean City for a fourth location.

“We’ve been doing well as a company and our last location opened on 4th Street in 2015,” he said. “So I’ve been looking for a new location and a new market that I haven’t been into. West Ocean City and North Ocean City were the top two.”

Sibony said his search led him to 137th Street. When he heard that Kirby’s Red Onion Grille was closing, he said he began making plans for a north-end location.

“There is a huge local following here … and I wanted to be a part of it,” he said.

In recent months, Sibony said construction crews have been hard at work tearing down walls and redesigning the restaurant and bar to include larger windows, an exposed brick wall and new bathrooms, among other things.

“We gutted the place and took the whole thing down to the studs,” he said. “It was quite the undertaking and took longer than we thought.”

“I want this to be year-round and something where people can come in and be treated like family,” he said. “We want to be a neighborhood bar, but we also want to give our guests a great food experience too.”

For the first time, the Taphouse menu will also feature a selection of melts and flatbreads.

“That’s something new we didn’t dabble with at 4th, 45th and 9th streets,” he said. “It’s a big staple of our menu, and it’s a lot of what I would like to eat. Although I’m a chef by trade, I like really good bar food.” 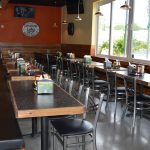 “We have 16 beers on tap, three domestic and 13 craft beers,” he said. “We also have a few bottles and cans of craft beer as well.”

Sibony said patrons can expect a quality dining experience at Taphouse Tavern, as 90% of the food is made from scratch and drinks are made by seasoned staff.

“I know really good food is coming out of the kitchen, really good drinks are coming across the bar, and I know they are getting really good service,” he said. “I would like to think we are doing things the right way and our customers are going to see the product of it.”

Sibony recognized his staff for making the first weeks of operation successful and encouraged everyone to visit Taphouse Tavern.

“We’ve been midtown and south since 2010, and this is our venture up north,” he said. “I’m very excited about it, and I think we are going to be here for a long time to come.”

Taphouse Tavern serves lunch, dinner and drinks daily from 11 a.m. to 2 a.m. The kitchen will offer a full menu until 1 a.m. every day, and happy hour will run from 3-6 p.m. Monday through Friday.

“All I ask is for people to come here, have an open mind and enjoy the atmosphere, food, drinks and service, he said. “Once they are here, they will want to come back.”