Earlier this year, Ocean City Fire Chief Chris Larmore announced his retirement after nearly 11 years as chief and over three decades with the town’s fire department. Larmore’s retirement became effective at the end of March, touching off an extensive search for his replacement.

On Tuesday, the Mayor and Council announced the process has been completed with the hiring of longtime Montgomery County firefighter Richie Bowers, who has served at different times as the fire chief in Montgomery County and also in Fairfax County, Va.

Bowers had been a member of the Montgomery County Fire and Rescue Service for 34 years, serving in every career rank from firefighter/EMT to ultimately fire chief. Bowers also served on the Federal Emergency Management Agency (FEMA) Urban Search and Rescue Maryland Task Force I team since its inception and has been on several deployments in that role including the Oklahoma City bombing and the 9-11 Pentagon terrorist attack. 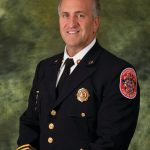 He was also the Montgomery County Operational Task Force leader during its deployment to New Orleans following Hurricane Katrina. Most recently, Bowers served as fire chief in Fairfax County, Va., a position he held for five years before resigning in February.

City Manager Doug Miller said recently staff had concluded a lengthy process to replace Larmore and that he had submitted a recommendation to the Mayor and Council for Bowers as the successful candidate. Before approving the recommendation, the Mayor and Council wanted to meet Bowers before confirming him as Ocean City’s new fire chief and that meeting presumably took place in a closed session on Tuesday.

Miller said the town of Ocean City received over 70 applications from all over the country for the vacant fire chief position. During the process, four internal candidates were interviewed along with six external candidates including Bowers. Miller said the Ocean City Volunteer Fire Company was very involved in the process, from helping develop a profile for the new chief to helping narrow the list of candidates to interview to actually sitting on the interview panel.