OCEAN CITY – The organizers of a city-wide composting program are seeking the community’s support to expand their efforts.

Last fall, Go Green OC partnered with The Hobbit Restaurant owner Garvey Heiderman – director of compost operations for the nonprofit – to launch a pilot composting program. And during the first phase of the program, the restaurant removed nearly 2,000 pounds of food waste from the trash.

“We wanted to see how much organic waste we could take out of the waste stream, and it was just over half of the waste we produced,” Heiderman said. “It was pretty staggering to me.”

Josh Chamberlain, founder of Go Green OC, said the goal is to expand composting efforts throughout the resort.

“It’s been a changing of tides,” he said. “People are really starting to come around to this idea.” 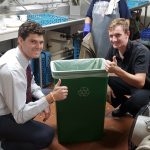 Heiderman said he has noticed a growing interest in composting and environmental issues, and Chamberlain noted that other resort restaurants are in the queue to join the program.

“We thought if The Hobbit generated that much waste, what do the crab houses and buffets do?” he said. “So the next phase is to expand the program, bring in more restaurants and collect more data.”

But before that happens, Go Green OC must raise funds for equipment and transportation, as no pickup services exist in the Ocean City area.

“Up to this point, all of the time and materials have been out of pocket,” Heiderman said.

To that end, the organizers said they have launched a GoFundMe campaign to expand the program.

“We have a goal of $5,000, but even raising a few thousand dollars will go very far,” Chamberlain said. “We use 100% of the proceeds for programming.”

The nonprofit’s compost program includes partnerships with the restaurant, consultants, Sunbelt Rentals, and a local organic farmer, who uses the compost on his fields.

Organizers said the program also benefits the town in several ways, as it reduces tipping fees and the need for multiple weekly trash pickups. They added compost can be used to improve the health of the Chesapeake Bay and limits the amount of pesticides.

In 2019, the nonprofit’s goal is to compost more than 10,000 pounds of food waste, which would require local permitting. But Heiderman said he is eager to see the program grow.

“We are doing everything the right way and are having conversations with consultants and local officials,” he said. “After all the conversations I have had, I am still very encouraged we can make this work on a city wide scale one day, it will take a lot of effort but this is the first step.”

As the program expands, organizers said they will be working with students and professors at Salisbury University to collect and analyze the data and create a model that can be used moving forward.

Chamberlain said the data will also be used to seek additional support from the town, which sends waste to an incinerator in Pennsylvania to be transformed into steam and then electricity.

He said if the program is expanded and the town is encouraged to send its waste to the county landfill again, it would put money back to the local economy and cut down on emissions from trucks that ship the waste out of state.

“Nothing’s been done like this before, but it can be done here,” he said.

Heiderman added the program is a win-win for the environment and for the town.