ASSATEAGUE — An Assateague wild horse nearly choking on and ultimately ingesting a piece of ribbon this week highlighted the dangers of balloon releases and potential impacts on wildlife.

On Monday, one of Assateague’s famed wild horses was seen struggling with a section of ribbon that had been attached to a latex balloon caught in its throat. National Park Service rangers attempted to intervene, but couldn’t get close to the struggling horse because the other horses in her band were so protective of her.

According to Assateague Island National Seashore Chief of Interpretation and Education Liz Davis, the horse was ultimately able to chomp through the ribbon and did not ingest the balloon although it is uncertain just how much of the ribbon she ingested. The incident illustrates the dangers of balloon releases and where they end up and ultimately impact wildlife.

“The horse bit through the ribbon and did not swallow the latex balloon attached,” she said. “The balloon and the remaining ribbon were recovered. We speculate the balloon was entangled in the grass and was subsequently eaten by the horse. Yet another detrimental example of the environmental consequences resulting from balloon releases.”

Latex and Mylar balloons are banned at the Assateague Island National Seashore per park rules, which state “all public areas of the park are closed to the possession or use of all balloons to include those made of latex, Mylar or plastic. Balloons are routinely mistaken as a food source by marine mammals and sea turtles. Ingestion of such items presents a serious health risk to these protected species.” 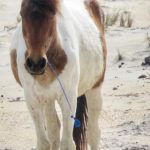 Davis pointed out while the national park rules prohibit balloons, there is obviously no way to prevent them from drifting over to the island through the air or on the tides, perhaps from hundreds of miles away.

“Nevertheless, Assateague Island is surrounded by the rest of the world,” she said. “Balloon releases from miles and miles away may drift and land on the island by air and water.”

Last year, enterprising local siblings Josh and Emily Blume launched a summer-long contest for offshore boaters and fishermen to collect balloons often found floating in the ocean. The idea was borne after the kids learned from their father, a local charter boat captain, about how offshore vessels often come across the colorful but potentially danger balloons floating in the ocean.

To that end, Josh and Emily Blume created “Blume’s Balloon Round-Up,” a contest that encouraged boaters and fishermen to retrieve balloons and report their “catches” daily from June 29 to September 30 with prize packages on the line for the winners. The resort’s fishing community quickly embraced the concept and spent much of the summer enthusiastically pulling balloons from the ocean all summer, reporting their catches and displaying the balloons as proudly as they fly their release flags.

The goal at the outset was to retrieve 1,000 balloons in the first year, but the Blume’s Balloon Round-Up blew past that objective. Through the end of last September, nearly 1,400 balloons had been collected off the coast.