(Editor’s Note: The following is a series on the men and women who have spent their summers protecting all those who came to Ocean City for fun and safe vacation.)

OCEAN CITY — Bob Bonanno was a child of the beach from the start.

His grandparents owned a townhouse on 47th Street and he’d spend every summer with them. The days were always spent on the beach where Bonanno and his younger brother would watch in awe as the lifeguards made rescues right in front of them. “I could not believe how fast they could run and swim,” he said.

In 1983, he passed the OCBP test and began guarding the very stretch of beach that he’d grown up on. That included one of the most crowded beaches in town: 49th Street in front of the Ocean Club. Thousands always showed up for the “palm trees, bikini contests, tiki bar and the sounds of Jamaican Island steel drums,” according to Bonanno. 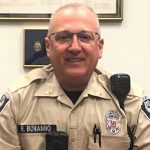 To the casual observer, that may seem like a relaxing day. But when you add a designated surfing area and rough conditions, it is anything but peaceful. One day “a large group of swimmers became caught in a rip current and drifted inside the surfing area,” he recalled. With surfboards speeding towards struggling swimmers, Bonanno had to act fast.

Bonanno left the OCBP in 1988, trained to protect and serve the people he watched over. It turned out to be good experience as he went on to join the Montgomery County Sheriff’s Office where he currently serves as a deputy sheriff lieutenant.