BERLIN- After starting the season a perfect 5-0, Stephen Decatur’s boys’ varsity lacrosse team has dropped two straight to tough Bayside North opponents in the last week to fall to 5-2.

The Seahawks opened the season with five straight wins including a 5-4 win over crosstown rival Worcester Prep in the opener. The Decatur boys stayed on a big roll through the early part of the season with three straight against Bayside North opponents including a 6-5 win over Easton, a 17-2 rout of Kent County and an 11-7 win over North Caroline last Wednesday.

That bill finally came due last Friday with a road game against Queen Anne’s. The Seahawks did open the game with a quick 1-0 lead, but the Lions scored the next three to end the first quarter with a 3-1 lead. After a Queen Anne’s goal made it 4-1, Decatur’s Chase Porter got his team back on the board to cut the lead to 4-2 about half way through the second quarter. 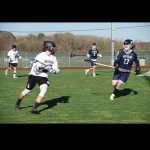 Decatur’s Eric Gwin looks for an opening against the Kent Island defense during the first quarter of Monday’s game against the Buccaneers.
Photo by Shawn Soper

The Lions continued to build its lead through the third quarter, extending it to a game-high eight goals at 11-3 before Porter ended the Decatur drought and pulled his team to within seven at 11-4 with about five minutes remaining in the third.

The Seahawks did not quit, as his been their reputation this season, and chipped away at the lead with two goals by Jack Remmel and two more by Porter, but the damage had been done and Queen Anne’s hung on for the 12-7 win. Porter finished with four goals and an assist, while Remmel added two.

Back in action on a windswept field at home on Monday against old nemesis Kent Island, the Decatur boys fell, 9-5, in a tight, well-played game. The Seahawks did get on the board early in the first quarter, but eventually fell to the Buccaneers. With the loss, the Seahawks dropped to 5-2 on the season. Decatur will compete in an Easter holiday tournament with Old Mill and North County this weekend.