OCEAN CITY – With one of the biggest and best ever in recent memory last weekend, the Delmarva Irish-American Club’s St. Patrick’s Day Parade is now being billed as “the largest in the state of Maryland.”

With the combination of near-perfect weather and the actual St. Pat-rick’s Day just a day later, several thousand visitors crammed into Ocean City on Saturday for the annual St. Patrick’s Day Parade. Thousands up-on thousands lined the parade route and countless others filled into their favorite watering holes along with the other associated events. 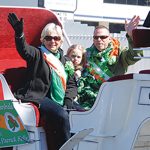 Pictured above, the grand marshals for the 2019 parade were Fran and Michael Patrick Kelly.

To be sure, traffic was snarled at times and reports of waiting an hour just to go a few blocks circulated, but by and large it was a fun, safe weekend for most. For years, Ocean City’s St. Patrick’s Day Parade has been billed the second largest in Maryland, playing second fiddle so to speak to the annual big parade in Baltimore. However, Mayor Rick Meehan announced at the close of Monday’s council meeting the distinction had been swiped from Charm City.

“Thanks to the Town of Ocean City for supporting the Delmarva Irish-American Club and thanks to all of the businesses for their support for what has now become the largest St. Pat-rick’s Day parade in the state of Maryland,” he said. “It will continue to be that. Talk about economic benefit. It is the largest weekend of the year not between Memorial Day and Labor Day and it might surpass Memorial Day for an awful lot of the businesses, which is what I hear from them.” 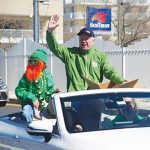 When asked later how the distinction of being the largest St. Patrick’s Day Parade in the state was quantified, Meehan said Baltimore’s parade featured around 100 participants from three states, while the Delmarva Irish-American Club’s St. Patrick’s Day Parade in Ocean City last Saturday included over 125 entrants from as far away as New York and New Jersey along with Maryland and Delaware.

While Meehan used the number of entrants to quantify the distinction of being the largest St. Patrick’s Day Parade in Maryland, the proof might have been in the pudding with the huge throngs along the parade route and throughout the resort.

“We had a great weekend and the St. Patrick’s Day Parade brought over 100,000 people to town,” he said. “We’ll have a better idea when we get some of the metrics back. It was a huge success and there were huge crowds all weekend, starting Thursday with people walking along the streets and wearing their green.” 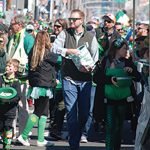 Meehan said the bulging crowds carried over to some of the associated events, creating optimism for what has become the jumpstart to the season after a long winter.

“They also had 1,500 runners in the Shenanigan’s 5K, which was the largest ever,” he said. “It was a great weekend for Ocean City and a good kick-off for the season. Let’s hope it continues throughout the year.” 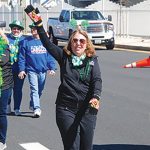 The award for the best marching unit went to the Camden County Emerald Society Pipes and Drums, while the Royal Elite Diamondz Majorette Hip-Hop Dance Team earned the honorable mention. The award for the best motorized unit went to the Perry County Old Iron 1929 Model A Truck, while the Tall Cedars of Lebanon-Evergreen Forest 49 earned the honorable mention. 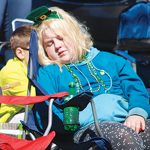 This sleepy little girl crashed before the parade even got started. 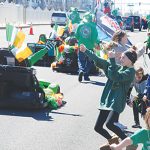 Parade swag was all the rage for enthusiasts including this little one reaching out for beads.