SELBYVILLE – Diana Ross, Jim Gaffigan, Billy Currington, and Gavin DeGraw are among the dozens of artists who will grace the Freeman Stage this summer.

In a press conference Tuesday, Michelle Freeman, president of the Joshua M. Freeman Foundation, unveiled the first portion of this season’s performance lineup.

“There is something for everyone this season, and your suggestions and recommendations made the final cut this year more than ever,” she said. “You’ll enjoy tribute acts, our seasonal favorites, wonderful free programming and last, but not least, our main stage performances.”

Headlining performances this year include The Mavericks on June 7, O.A.R. with American Authors on June 8, Boz Scaggs on June 29, Diana Ross on July 2, Southside Johnny and The Asbury Jukes on July 10, The Marcus King Band on July 11, Buddy Guy on July 15, moe. and Blues Traveler with special guest G. Love on July 16, The War and Treaty on July 24, Ben Folds & Violent Femmes on July 29, Steve Miller Band and Marty Stuart on July 30, Gavin DeGraw on Aug. 3, Lyle Lovett and his Large Band on Aug. 6, Brian Setzer on Aug. 11, Billy Currington on Aug. 15, Jim Gaffigan on Aug. 23 and The Beach Boys on Aug. 24.

Additional performances include The Fab Four, a Beatles tribute on June 1, The Tamburitzans on June 15, Kat Edmonson on June 21, Kashmir, the Live Led Zeppelin Show on June 22, Kaia Kater on June 27, dancer Paige Hernandez on July 17, the Bob Seger tribute, Hollywood Nights on July 20, Mike DelGuidice & Big Shot: Celebrating the Music of Billy Joel on July 27, ABBA, The Concert on Aug. 2, Summer of Love on Aug. 16, Tito Puente Jr., with the Rico Monaco Band on Aug. 17 and Master of Soul, a Motown tribute on Aug. 30.

Crowd favorites, who will once again grace the stage, include the Mid-Atlantic Symphony Orchestra, the First State Ballet Theatre, Clear Space Theatre Company, Brown Box Theatre Project and Classic Albums Live, who will present Tom Petty and the Heartbreakers’ “Damn the Torpedoes” album. “Locals Under the Lights,” where local artists have their moment in the spotlight, will also be back this summer as well as the annual Arts in Jazz Festival.

“As we’ve grown our season, we also know it takes time to curate a diverse lineup,” Freeman said. “We reveal our first glimpse of the season today, and we are still booking additional acts that we will share with you on March 26.” 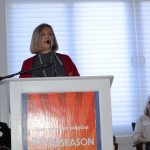 Patti Grimes, the foundation’s executive director, said the main stage performance series is one of the many arts programs the organization provides each year. She explained the foundation also focuses on community access, performing arts, young audiences and arts in education.

“Today we celebrate the arts and the impact they bring to our community …,” she said. “With your support, over half a million people have enjoyed the arts through the Joshua M. Freeman Foundation.”

Fay Blake, founder of Pathways to Success, commended the foundation for serving at-risk youth in her program.

“The impacts of the arts is extraordinary,” she said, “the gift of memorable, awe-inspiring performances that the students we serve would not have an opportunity to experience if not for the diligent work, foresight and vision of Michelle Freeman, Patti Grimes and her wonderful team at the Freeman Stage. Being able to make a positive difference in the lives of all people, is an amazing thing and an incredible job.”

“The arts compel us to explore who we are as individuals and as communities, both local and global …,” she said. “In asking us to be original, the arts allow us to discover that we are. Asking us to be engaged, the arts deepen our bonds with each other, overlapping histories for a shared future. I don’t know how to measure that impact but I know it is extremely profound, and I know that the Freeman Stage is an integral part of that in Delaware.”

The Freeman Stage will feature more than 60 performances in its 2019 season.

The second portion of this year’s performance lineup will be announced on March 26 at Dogfish Head Brewings & Eats in Rehoboth Beach. Tickets will go on sale for all events at 10 a.m. on Monday, April 1.