OCEAN CITY – The Styx, Crack the Sky, Newsboys and Ballyhoo are among the 18 acts scheduled to appear at this year’s inaugural Jellyfish Festival in Ocean City.

With nearly four months remaining until live music, extreme sports and family fun converge in a weekend-long special event, producers this week gave community stakeholders a glimpse of national, regional and local acts that will be featured at the Jellyfish Festival in June.

This year, musical acts will perform throughout the weekend of June 21-23.

On June 21, Ballyhoo, Badfish, Sweet Leda and King Schascha will take the stage on what event organizers are calling “Fresh Friday.”

“Fresh Friday was made up to have bands that are regional, travelling artists, local artists, and showcasing the younger demographic music that gives any festival its young, fresh feel,” Hoffman said.

The following day, or “Classic Saturday,” festivities continue with performances by the Styx, Crack the Sky, the Ravyns and Blue Miracle.

“It’s horns, it’s guitars, it’s drums,” Hoffman said. “It’s really what rock and roll is about. We are paying tribute to that with some of the biggest classic rock artists in the world playing on our beach.”

And on Sunday, the festival will conclude with performances from Newsboys and Crowder.

“This is what signed me up for the festival …,” said organizer Joe “Salty” Selthoffer. “We have two of the top five [bands] in the country playing here in Ocean City Sunday night for our ‘Music with a Message’ and we are very, very excited about that.”

“It gives us the ability to bring that family message to the beach,” he said.

Organizers highlighted their efforts to find national and regional acts using an online survey, which generated more than 400 responses.

“It’s built by us, but designed by people in the community,” Hoffman said.

Illusion Sound and Lighting President and CEO Brian Gilpin, who joins the production team with years of experience in producing major music concerts, noted that many of the acts were excited to perform at a unique event venue.

“Most of these bands have never played on the beach,” he said. “They really couldn’t believe it’s actually going to happen on the beach.”

Producers of the Jellyfish Festival said they are working closely with the town to ensure the event is a success. The festival will feature state-of-the-art stages, a Jellyfish Tentacle Village, numerous sporting and fitness events and arts and crafts activities utilizing the town’s best assets, including the beach and Ocean Bowl Skate Park. 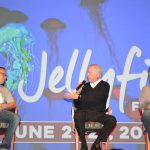 For his part, Mayor Rick Meehan said the Jellyfish Festival is expected to fill the void left by the Dew Tour, a popular multi-sport event held in Ocean City from 2011 to 2014.

“I think we are going to surpass what the Dew Tour did in Ocean City,” he said. “I think with the sporting events, the village and the music there will be something for everybody. Like a jellyfish has tentacles, I think this is going to reach out and attach itself to everybody.”

Back in October of last year, the Ocean City Mayor and Council approved a Memorandum of Understanding with the Jellyfish Festival for the town to provide $198,000 to specifically land headline musical acts for the event.