Walls adorned in Channellock Blue and gleaming new tools greeted the students as they got their first glimpse of their newly outfitted workroom. Worcester Tech was treated to a shop makeover and thousands of dollars in new equipment after winning a national contest sponsored by the tool company Channellock.

“Look at the excitement on the kids’ faces,” welding instructor Rick Stephens said. “How can you beat that?”

In October, high schools and colleges from throughout the country were invited to participate in the Channellock Trade School Trade-Up contest to win tools and prize money. Worcester Tech’s welding students submitted a two-minute video outlining their program and its need for new equipment. The school was named one of three contest finalists and went on to be declared the winner after its video received the most votes in an online contest.

Channellock staff spent the weekend at Worcester Tech painting and outfitting the welding shop. Company leaders arrived at the school Tuesday morning to unveil the newly equipped shop to students.

“The shortage of skilled tradesmen is huge,” said Jon DeArment, COO of Channellock, adding that programs like Worcester Tech’s would introduce teenagers to the field. “Anything we can do to help kids learn we wholeheartedly support.”

DeArment told Worcester Tech students the story of Channellock, which was created in 1886 by George DeArment, a Pennsylvania blacksmith. The business that began with him selling his hand-forged tools out of the back of a wagon expanded exponentially through the next century and today manufactures more than 130 sizes and types of pliers and tools.

“There’s no question trade schools in America are very important,” he said. “What kind of world would we live in if we didn’t have skilled tradesmen?”

He said the average tradesman was 56 years old, which meant that it was imperative that the country supported a younger generation of skilled workers. His added that own daughter, now a college student, had benefited from a welding program at a technical high school.

“She learned how to work with her hands and that it’s okay to get a little dirty,” DeArment said.

“I think it’s probably one of the best models of a career and technology center we have in the state,” she said.

Salmon particularly praised the school’s SkillsUSA program, which is headed by Stephens. It was at a national SkillsUSA competition that students first learned that Channellock would be hosting a contest. Salmon thanked students for entering the contest and congratulated them on the win.

“I think it’s just awesome that here in Maryland we were able to beat everybody else,” she said. 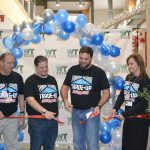 Lou Taylor, superintendent of Worcester County Public Schools, said the contest couldn’t have come at a better time, as the school had been in need of additional welding equipment. Taylor said there were 30 kids enrolled in the welding program and there were at least that many more on a waiting list. Because there was no welding program when the school was built 10 years ago, what once served as the manufacturing shop has been retrofitted to serve the welding program. Welding, which is now in its fourth year at the school, has proven increasingly popular.

“Rick Stephens does a fantastic job with this program,” Taylor said. “To our Channellock friends, you couldn’t have picked a better instructor, a better program, to focus your resources and energy on.”

Taylor said the Channellock tools and equipment would ensure that even more students were able to take part in the growing program.

“We appreciate this more than words can tell you,” he said.

“It’s a blessing,” said sophomore Caleb Myers. “There were kids that didn’t even have equipment before.”

Junior Ross Quilter, among the students admiring the new tools, apparel and equipment in the shop, said Channellock had done more than he’d hoped.