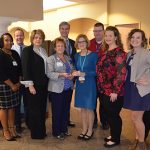 Atlantic General was selected as a winner in the rural health category for its dedication to the health of the Eastern Shore community.

To reduce hospital readmissions, Atlantic General deployed a community-based telehealth program using remote patient monitoring (RPM) to help patients through the delicate time between hospital discharge and the following weeks when he or she is working to establish good health practices with his or her regular doctor. The program’s coordinators can also intervene when someone’s health starts to fail but before there is a need to be admitted to the hospital.

Upon discharge, patients at high risk of readmission are set up with a custom kit, which might include a tablet computer, blood pressure cuff, pulse oximeter, and standard weight scale.

“We’re very proud to be recognized as a Health Quality Innovator of the Year,” said Michael Franklin, FACHE, CEO of Atlantic General Hospital. “This is truly a collaborative effort among a dedicated team of people working to improve the health of this community, showing how Atlantic General is the leader in caring for our community.”

BERLIN – Increased interest rates and home prices continue to slow the market on the Lower Shore, according to the latest numbers from the Coastal Association of REALTORS® (Coastal).

New listings that went on the market in December were down 14.8 percent compared to the same time last year in all three counties. That translates to 304 new listings and 3,091 active listings. Individually, available units were down by 14.7 percent in Worcester, by 24 percent in Wicomico, and by 3.2 percent in Somerset.

“We saw four interest rate increases in 2018, and that, paired with increased listing prices, can cause some sticker shock, particularly for first-time buyers,” said Coastal President Bernie Flax. “The interest rate increases are expected to slow this year, so we’re hoping that will lead to an activity boost in the local market.”