SNOW HILL – Veteran prosecutor Kris Heiser was sworn in as the first female state’s attorney for Worcester County this week.

On Monday, Heiser was instated as the new Worcester County state’s attorney in front of a standing room-only crowd.

Heiser defeated challenger William McDermott with 51 percent of the vote to win her seat in June’s primary election. The primary race ultimately decided who would take over the Worcester County State’s Attorney’s Office as no Democrat filed for election.

For Heiser, the victory represented a homecoming of sorts. After obtaining her Juris Doctorate from the University of Maryland School of Law, she soon moved to Ocean City to pursue a career as a prosecutor.

From 2008 to 2011, Heiser worked as the assistant state’s attorney in Worcester County before taking a similar position in Wicomico, where she was also in charge of the hiring and training of all new prosecutors and support staff for the District Court division. She also taught police officers at the Eastern Shore Criminal Justice Academy and has served as an interagency liaison among county law enforcement agencies.

Held at the courthouse in Snow Hill this week, the swearing in ceremony featured remarks from friends and peers who knew Heiser personally and professionally.

“Congratulations again for your successful campaign, but the political chapter of this story has now ended and what now begins is the difficult and often thankless task of being the day-to-day state’s attorney,” he said. “As you well know, you will be called upon to balance the competing interests of law enforcement, victims, the defendant, the court, and of course the law. All with a mind toward seeking the truth and seeking justice.”

Shockley shared the role of a prosecutor and noted that Heiser was qualified for the position.

“Ms. Heiser, I speak for all the members of the court when I say I have confidence you have the prerequisite skills, judgement, discretion, dedication and humility to discharge your constitutional duties,” he said. “And we look forward to working with you in your successful endeavors.”

“Even though she has been working in Wicomico County the past seven years, I for one consider her a Worcester County attorney,” she said. “This is where she lives, this is where her husband serves as a police officer and this is obviously where her heart lies. And you can tell that because she worked tirelessly throughout an entire impressive campaign so she can bring herself back to Worcester County, so she can serve her own community as our next state’s attorney.”

Coates pointed out the lasting impression Heiser had on her colleagues when she started working in Worcester County.

“When I first met Kris 10 years ago, she was a brand-new prosecutor and I was a defense attorney,” she said. “The first thing most people notice when they met Kris in court for the first time was that she was really smart. In spite of being new, she was well spoken and she could efficiently and competently handle the docket. She was comfortable and easy to work with because she exudes a warmth and a likeability that has made her a natural liaison between the police officers and both sides of the trial table.”

“She created a spirit of collegiality between the prosecutor’s office and the defense attorneys who worked with her …,” she said. “You didn’t always get what you want when you dealt with Kris – apparently that’s part of her job – but she always dealt with you fairly and with respect, and always with a touch of humor that didn’t sting quite so much when she said, ‘Cathi, you know I can’t do that.’ But I always appreciate that she never blamed me for trying.”

Coates jokingly confessed the first thing she noticed about Heiser were her high-heeled shoes.

“There is an old saying and it says you can tell a gentleman by his shoes,” she said. “Ironically and truly, this past Friday I read a newspaper article written by a female author who opined that old saying still holds true today. She said, ‘Shoes can still point the way to a man’s moral character.’”

“She knows what she likes and what she wants,” she said. “She’s not only willing to put herself out there, but she’s willing and able to do the hard work needed to achieve the goal she sets for herself.”

For her part, Heiser said she was humbled to be the next Worcester County state’s attorney and pointed out the rewards of being a prosecutor.

“When we prosecutors win cases, we can sleep at night because the outcome has awesome consequences to both victims and defendants,” she said. “It’s a product of our fight for justice, but also the fairest legal system humans have ever devised. When we lose a case, we can sleep at night for the exact same reasons. I believe in the system, and I am proud to play this role in it. We succeed when the innocent are exonerated as well as when the guilty are convicted.”

Heiser thanked her family and friends for their support as well as her mentors for their guidance. She also recognized the assistant state’s attorneys, who were also sworn in to their positions on Monday.

“I am proud and excited to work with you every day to keep our county safe,” she said. “As Magistrate Coates said, I am glad to be home, and I pledge to do everything in my powers to support you, to assist you and to promote you as proactive community prosecutors engaged with our citizens to change Worcester County for the better.” 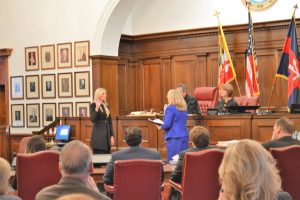 “For my part as state’s attorney, I promise to collaborate with you, to be a resource for you and to stand next to you in defense of our community,” she said. “Together we will work to address the opioid crisis, protect vulnerable adults and children, and to ensure the safety and security of our county.”

“To the citizens of this county, I do not take this position lightly,” she said. “As chief law enforcement officer, I will face difficult decisions, and I am prepared to make them. I pledge to work hand in hand with our fine law enforcement representing all agencies in Worcester County to keep you and your family safe and to hold offenders accountable. But I also pledge to be transparent, communicative and accessible to you. When you have concerns, I want to hear them.”

“Citizens, defense attorneys, judges, victims and defendants alike will all be able to count on my team of prosecutors for fair and consistent administration of justice and the highest level of ethics,” she said. “Worcester County deserves no less.”