BERLIN- Worcester Prep’s girls’ varsity basketball team continued to roll this week with a tight win over Delmarva Christian last Friday followed by another blowout over Holly Grove on Monday.

The Mallards’ record now stands at 7-0 after the pair of wins last week and they are scoring in bunches. The seven-game win streak to start the season includes victories by scores of 53-8, 71-2 and now 53-2 with the win over the Eagles on Monday. 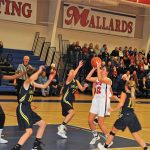 Worcester’s Emily Copeland gets a shot off in traffic during the second quarter of Monday’s home game against Holly Grove.
Photo by Shawn Soper

Worcester jumped out to an early 10-3 lead after the first quarter, which would prove to be decisive. Delmarva Christian played the Mallards even in the second quarter and Worcester led, 18-12, at the half. Worcester outscored the Royals by one point in the third quarter and the two teams played even in the fourth, but the early first-quarter lead stood up and Worcester hung on for the 42-35 win. Hailey Merritt led Worcester with 23 points, while Delaney Abercrombie scored seven and Grace Gardner added six.

Back in action at home on Monday against Holly Grove, the outcome was never in question for Worcester. The Mallards led 22-0 at the end of the first quarter and 36-2 at the half. Worcester pulled back in the second half and emptied the bench with every player getting into the box score. Gardner led the offensive attack with 11 points, while Hannah Merritt added 10. Hailey Merritt and C.C. Lizas each added six points.

The Holly Grove game was the last for the Mallards before the Christmas break. The Worcester girls will compete in the Governor’s Challenge Holiday Tournament on December 26 -27 before returning to regular league action on January 5 against Salisbury School.

SNOW HILL – Local officials are entreating the state to increase Worcester County’s COVID-19 vaccine allotment.Billy Birch, the county’s director of emergency services, asked the Worcester County Commissioners on Tuesday to again write to Gov. Larry Hogan and state officials regarding the need for more vaccine doses. There are now more than 6,400 people on… Read more »

Mass Vaccination Site Announced For Salisbury No Later Than March 18

BERLIN — A COVID mass vaccination site on the Eastern Shore will likely open in roughly two weeks, Governor Larry Hogan announced on Tuesday.During his weekly COVID-19 press conference on Tuesday, Hogan outlined the state’s efforts to quickly get vaccines into the arms of those that want and need them, but challenges remain. The state’s… Read more »

ASSATEAGUE — Ten days after a deceased 30-ton humpback whale washed up on Assateague, the creature was finally removed from the beach last weekend, but its presence on the barrier island will likely remain for a while.On Feb. 18, a female humpback whale stranded on the beach at Assateague for reasons unknown and perished. Throughout… Read more »

SNOW HILL – Final repairs are being made to the town’s new riverboat as officials prepare to bring it to Snow Hill by the end of the month.As repairs near completion, the Town of Snow Hill has spent the past several weeks seeking proposals from potential operators of what is essentially a floating restaurant. Proposals… Read more »