OCEAN CITY — After a major dust-up in Rehoboth Beach this week over the positioning of a nativity scene on town-owned property, a closer look at the hundreds of holiday displays in Ocean City revealed the number of faith-based displays included is fairly underwhelming.

Last week, St. Edmond’s Catholic Church in Rehoboth Beach placed a nativity scene on town-owned property near the bandstand at the Boardwalk on behalf of a local Kiwanis charity. City officials then ordered the faith-based symbol of the Christmas season to be removed from town property.

The backlash from the decision to remove the nativity scene from town property was palpable and grew all last weekend and spilled over into this week. In an era of hypersensitivity and political correctness run amok, the residents and visitors of Rehoboth Beach along with its business community and local government were clearly divided over the issue that continued to simmer late this week.

The issue in Rehoboth prompted a closer look at Ocean City’s countless holiday lights and displays and revealed there is no stated policy on faith-based displays on city property or at city-sponsored events including the popular Winterfest of Lights. Instead, it appears common sense and a spirit of acceptance and tolerance prevails in Ocean City compared to its beach resort neighbor in Delaware. City Manager Doug Miller did some cursory research into the town’s policies regarding faith-based holiday decorations and found nothing formal on the books.

“I’m not sure if we have a formal policy or if our decoration selection was simply an evolutionary process,” he said. “I’m certain that we do have some faith-based decorations in the eight-minute loop. Also, I believe that our ability to have some Christian decorations in displays like ours have been upheld by the Supreme Court.” 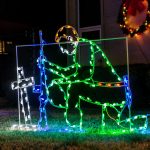 A display is pictured in front of the U.S. Coast Guard Station off Philadelphia Avenue.

Waters said the few faith-based displays among the hundreds in Ocean City were donated over the years and remain part of the overall festive theme in the resort this time of year. She also evoked the “reason for the season” mantra, regardless of one’s faith.

“Our faith-based displays were donated some time ago and have been enjoyed by visitors ever since,” she said. “After all, these faith-based holidays are the foundation of the season which we are celebrating.”