OCEAN CITY — Ocean City’s Winterfest of Lights is observing its 26th year, proving tradition and holiday cheer can endure in a beach town.
The event was started in 1992 by former Ocean City Recreation and Parks Director Tom Perlozzo and has evolved into a festive, time-honored family tradition for thousands of shore families as well as visitors. Since then, the Winterfest of Lights has paved the way for other area holiday light celebrations like Delaware’s Cape Henlopen Winter Wonder Fest and Salisbury’s Winter Wonderland display in the Salisbury City Park.

Perlozzo, currently the director of Recreation and Parks for Worcester County, was inspired to push for the festival after attending a similar light celebration in Wheeling, W.Va., with his family nearly 30 years ago.
After receiving backing from the Ocean City beautification board, the town’s chamber of commerce and local business owners, Perlozzo petitioned the Mayor and Cuncil for the bulk purchase of a number of light displays, most of which have been refurbished and are still in use today. 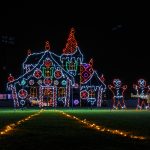 “For the most part, everyone could recognize the potential benefits,” Perlozzo said. “It just made a lot of sense.”
Winterfest of Lights has seen its share of changes over the years. What initially started as an entirely outdoor event at Ocean City’s 58-acre Northside Park has transformed to include a heated Winterfest Pavillion tent full of festivities. Costing just $5 for patrons aged 12 and up and free for those below, visitors can explore the Kris Kringle Korner for pictures with Santa Claus, enjoy a cup of hot chocolate provided by the OC Recreation Boosters, browse the White Marlin Marketplace for gifts and goodies, admire the 48 different Christmas trees adorning the interior, or take pictures with family and friends at different Instagram “hot spots.”
The festival’s set-up is a long process, beginning right after Ocean City’s Sunfest ends in late September. According to Frank Miller, the Ocean City director of special events, that is when over 400 light displays boasting more than 800,000 individual lights are installed throughout the park. The festivities tent arrives the third week of October and takes nearly a month to set-up before opening night’s tree-lighting ceremony, which is traditionally one week before Thanksgiving Day and features a festive affair and students from Ocean City Elementary School.

Organization for next year’s festival will begin before this year’s is even over. Miller said that by the third week of December, a layout will be made for Winterfest 2019 to prepare for breakdown and storage – a process set to begin Jan. 2 and last through the month.

The 48-day festival annually boasts over 100,000 visitors and employs six of the town’s eight Boardwalk trams to transport them along the 12-minute ride through the displays. Onlookers can enjoy classic Winterfest favorites, like the large-scale, fully refurbished 12 Days of Christmas set, one of the original pieces ordered by Perlozzo, as well as a state-of-the-art, 50-foot tree purchased new in 2017.

This year’s Winterfest will close out by hosting Ocean City’s New Year’s Eve celebration, sponsored by Coca-Cola. A center stage will be erected in the Winterfest Pavilion, where a DJ will spin hits for party-goers to groove to. Coke-sponsored giveaways will be handed out throughout the event. Tram rides through the displays will be available until 11:30 p.m. and a fireworks show will begin at midnight.
If one thing is clear, it’s that this is a truly unique event. The special events department doesn’t employ a lot of local advertising for Winterfest, relying heavily on word-of-mouth advertising between local family and friends.

“It’s sort of like the hidden gem of the holiday season here on the Eastern Shore,” said Miller.

Perlozzo, who still attends Winterfest all these years later, said he hopes it continues for years to come.

“It’s for the young and old and everybody in between,” he said. “It adds a little bit of magic to the season.” 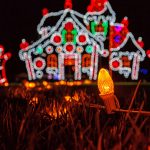