WHALEYVILLE — A Delaware man, arrested in July after a raid at a residence in Whaleyville turned up thousands of bags of heroin, other drugs and a loaded handgun, pleaded guilty last week to possession with intent to distribute and was sentenced to 20 years, all but 10 of which were suspended. 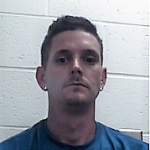