OCEAN CITY — It is with great sadness that the family of Frederick “Fred” Charles Wetzelberger, age 90, announce his passing on Nov. 27, 2018. 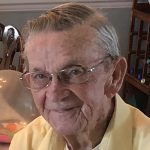 Fred was a veteran of the US Navy. He worked over 35 years for the US Postal Service. After retiring, he moved with Thelma to Ocean City to start a new career supervising the painting division for his son’s firm. He was an invaluable asset who mentored others who now have successful careers. He continued as a handyman into his 80’s and his quality of work was admired.

Fred held leadership positions in the Woodlawn Knights of Columbus, Little League and Recreation & Parks. He traveled to Las Vegas over 70 times and enjoyed his visits to local casinos. He enjoyed crossword puzzles and computer solitaire daily. He was famous for the beautiful multi-colored roses he grew in his garden. His greatest joy was helping family and friends in any way he could. He was selfless and dependable to a fault.

In lieu of flowers, donations may be made to the Sisters of St Francis of Assisi, 3221 S. Lake Drive, ST Francis, Wis. 53235, Lakeosfs@lakeosfs.org 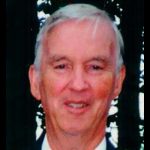 Born in Berlin, he was the son of the late Robert Wimbrow Phillips and Thelma Bradford Phillips. His grandparents were the late James Richard and Audrey Phillips of Berlin and Elijah and Ruby Bradford of nearby Berlin. He is survived by his wife, Mary Ellen Lloyd Phillips, and children, James “Jay” R. Phillips (Christie) of Ocean City, Kimberly Phillips of Ocean Pines, and stepson Kevin Lloyd (Carmen) of Kensington, Calif. There are four grandchildren, Brooke Phillips and Moorea Phillips of Ocean City and Max and Tora Lloyd of Kensington, Calif. Also surviving is his sister, Constance “Connie” Phillips Duke of Berlin. He also leaves his nephews, Robert “Bo” Duke, III of Ocean City, Christopher Duke of Arnold, Md., Robert “Brad” Phillips and John Phillips both of Jacksonville, Fla. and numerous cousins of the Phillips and Bradford families of which he was close.

Jim was a graduate of the last class from Berlin’s Buckingham High School in 1954. He attended Salisbury State (University) and the University of Maryland in College Park before graduating from Goldey Beacom School of Business in Wilmington, Del. Jim served in the United States Army before becoming a Maryland State Trooper and later became an agent for the Maryland Alcohol and Tobacco Tax Agency.

As Worcester County grew, Jim decided to join the booming real estate business. He earned his real estate broker’s license and later co-founded Phillips and Lloyd Real Estate Appraisals. He was a member of the St. Paul’s Episcopal Church in Berlin, serving for a time, as an acolyte and on the vestry.

Jim will be remembered by many as a devoted hunter and fisherman. He was the last living member of the Pine Tree and Cedar Valley Hunt Club on Assateague Island. Jim was an animal lover and will be greatly missed by all those he befriended while caring for his beloved dog Abbie.

BERLIN — Gregory David Secon, age 56, of Berlin, formally of Wethersfield, Conn., passed away peacefully after a long battle with cancer on Dec. 2, 2018, with his loving wife, Kirstin, by his side.

Greg was born on Jan. 3, 1962 in Harford, Conn. to Garrett and Karen D. Secon. He lived in Connecticut most of his life, relocating to Maryland in 2005. He spent his career working with his hands, most recently with Harrison Group in Ocean City. He was predeceased by his parents; grandparents Ernest and Evelyn Delesdernier and Edward and Katherine Secon; and uncle John “Jack” Delesdernier. Besides his wife, Greg is survived by family in Connecticut: brother Paul Secon of East Hartford; sister Susan Skoglund (Tom) and their children Matthew and Amanda of Marlborough; sister Peggy (Larry) of Enfield; and nephew Sean (Shaina) and their twins, Madison Ann and Colin Gregory (Greg’s namesake) of Vernon. Greg was especially fond of his uncle and aunt, Robert and Carole Carter of West Hartford, and he leaves numerous aunts, uncles and cousins to mourn his passing.

A celebration of Greg’s life will be held in Connecticut later this month. Letters of condolence may be sent to the family at www.burbagefuneralhome.com.

BERLIN — Violet Priscilla Rounds, 88, of Berlin, departed this life on Monday, Nov. 26, 2018, at her residence. Born in Berlin, she was the daughter of the late Emerson Purnell, Sr. and Annie Fooks Purnell. 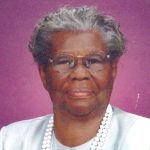 Mrs. Rounds will lie in repose on Friday, Dec. 7, 2018, from 6 to 8 p.m. at St. John United Methodist Church, 8829 Lewis Road, Berlin and Saturday, Dec. 8, 2018, from 10 to 11 a.m. at Calvary Pentecostal Church, 13325 Worcester Highway, Bishopville. The funeral service will begin at 11 a.m. Interment will follow at Calvary Pentecostal Church Cemetery, Bishopville. A ministry of comfort and dignity is being provided by Lewis N. Watson Funeral Home, P.A. in Salisbury. Please visit www.lewisnwatsonfuneralhome.com to offer condolences to the family.