BERLIN – A handful of new businesses have opened in downtown Berlin just in time for holiday shopping.

“I’m so happy to be able to be able to help these small business owners find a permanent home here in Berlin,” said Ivy Wells, the town’s economic development director. “Our building owners were extremely easy to work with and that’s probably why we are so successful. We have even more of a shopping experience to offer now. I love it.” 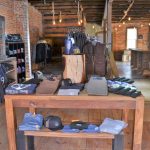 After an extensive renovation, Viking Tree Trading Co. has opened in the former home of Downtown Video.

Several shops opened last week in advance of Friday’s annual Christmas Tree Lighting in downtown Berlin. Viking Tree Trading Co., a shop created by Burley Oak’s Bryan Brushmiller and his parents, opened Nov. 20. Brushmiller said he and his father worked for months renovating the historic building, which once housed Downtown Video. He had a mason spend weeks creating a space with exposed brick and beams.

“The whole thing’s about local craftsmen,” Brushmiller said. “We probably spent way too much money making it look cool.”

The store, which is geared toward men, features men’s clothing and accessories. The shop has been busy during its first week open.

“We are incredibly delighted about the holiday sales and are replenishing the store this week,” Brushmiller said. “The cool stuff is going really quick. Customers are really enjoying the store for stocking stuffers.”

Next door, Gilbert’s Provisions continues to offer the cheese and charcuterie the shop became known for in its previous location behind Bruder Hill. After two months of renovations, owner Toby Gilbert was able to open the shop in its new space last Tuesday. He says he already appreciates the busier Main Street location. 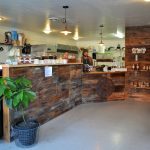 Proprietor Toby Gilbert is pictured inside his Gilbert’s Provisions store that has relocated to Main Street.

“It’s more energizing being up here,” he said. “You get to see people walking by and you’re not just staring at a parking lot.”

Farther south on Main Street, a trio of new businesses have opened in the vicinity of the town’s welcome center. Dreamweaver opened at 2 S. Main Street on Friday as visitors were streaming into town for the annual tree lighting. Brady Freestone, whose mother runs the shop, said the family already had a store on the Boardwalk in Ocean 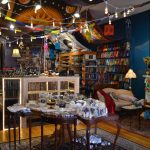 “We wanted to bring something different and positive to the town,” Brady Freestone said of her family’s Dreamweaver store at the corner of Main and Jefferson streets. 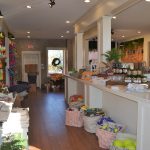 Yuppy Puppy owner Jamie Idzi has opened her boutique’s second location with the other in Bethany Beach.

City and was eager to set up in Berlin.

“We wanted to bring something different and positive to the town,” Freestone said. “We had a successful first few days with lots of positive feedback.”

The colorful shop features handmade and fair trade items from around the world. Freestone said Dreamweaver stocked items from Guatemala, Nepal, Peru and India, among other countries. He hopes the store will add to the town’s existing array of businesses.

“The town needs variety,” he said. “It brings in more people.”

Dreamweaver took over the space previously occupied by A Little Bit Sheepish, which will reopen in the coming days across the street in the former PNC Bank building. Next door to that, Yuppy Puppy is now open.

“We’re very excited to be a part of Berlin,” said Jamie Idzi, who owns the dog supply and lifestyle boutique. “It’s a very warm and welcoming community.”

“I just really liked the feel of the town and I noticed there were a lot of dogs around,” she said.

A few doors down, The Greyhound is also welcoming shoppers. The bookstore, which is in the Ayres building, includes books by local authors as well as New York Times bestsellers. Inventory also includes journals, notecards and handcrafted pens. Susan Ayres Wimbrow, whose great grandfather once ran a general store in the building, opened the shop this fall after publishing her own novel, “Death is My Life.”