BERLIN – A historic Berlin estate once home to a bed and breakfast has reopened as a venue for weddings and other special events.

The Merry Sherwood Plantation, located on Route 113 in Berlin, has reopened its doors to the public and will serve the community as an event venue for weddings, parties, funeral receptions and more.

Owner Kirk Burbage, who purchased the property in the early 1990s, spent years renovating the estate before opening a bed and breakfast operation on site. While the business shuttered in 2006, the house has continued to host several charitable events that have raised millions of dollars for local organizations.

“I had a wonderful grandmother, Anna Burbage, who was a mainstay in the community …,” he said. “She would have encouraged me to give back to the community and that’s what we’ve done.”

Now, after 12 years, Burbage said the property will reopen its doors to the public for weddings and other celebrations.

“I think the property offers a venue that isn’t typically found around here,” he said. 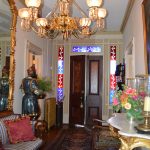 The front entry to the Berlin landmark property is shown.

Merry Sherwood – built on a portion of land granted from Lord Baltimore in the seventeenth century – was completed in 1859 for Henry Johnson and his wife Elizabeth Henry, the daughter of a local merchant and wealthy landowner.

“The property was her dowry,” Burbage said. “The word was he had to build her a home of suitable proportions in exchange for consent to marry, and this is what he built her.”

Listed on the National Register of Historic Places, Merry Sherwood – which combines Italianate, Greek revival and gothic influences – stands three full stories in height and features 27 rooms and a large cupola, which overlooks the surrounding land.

“There are three styles that are incorporated into the design and architecture of the house, which is kind of unusual,” Burbage said. “Ironically, for years people referred to it as the wedding cake house.”

As part of the new business venture, Burbage will be joined by Jim and Ruth Arty, whose years of experience in restaurants, catering and event planning will be used in managing the venue.

Jim Arty, the new operations manager for Merry Sherwood, said clients who book an event at the estate can expect a private atmosphere.

“Because we are limiting it to one major event per weekend, it means exclusivity. They have the run of the property …,” he said. “I think that’s something very special that we offer that very few others can or will.”

Ruth Arty, who serves as the new event coordinator for Merry Sherwood, said clients can take advantage of several ceremony and reception sites on the property. 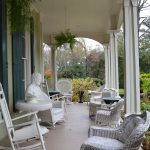 The front porch of the Merry Sherwood Plantation property is pictured. Photos by Bethany Hooper

“People can come here and choose one of several sites for cocktails, one of four distinct reception sites and one of several ceremony sites,” she said. “No one would be having the same wedding.”

She added that those using the property for a special event can also stay overnight in one of the many guest suites.

“Anyone who is renting the property will be able to also rent the rooms …,” she said. “They can utilize different parts of the property and have a different setting for every event, but they don’t have to travel anywhere.”

Burbage said no event is too elaborate for Merry Sherwood. He noted, for example, one event hosted hundreds of guests and featured Civil War-era attire and horse-drawn carriages.

Jim Arty added that they have also developed a list of recommended caterers, photographers, florists and other event vendors for clients to use.

“We want to give the guests exactly what they want and do it in a manner where it befits Merry Sherwood,” he said.

Burbage said he was excited for the future of Merry Sherwood and the changes being made to better serve the community.

“The whole purpose was to share it with the community because I think it has something to offer,” he said. “For me, the most exciting part is to see the property the way it should be.”