OCEAN CITY — By all accounts, Operation Tourist Boom, which turned the downtown area into a war zone of sorts last weekend, was a big success and accomplished most of its training goals.

The Maryland National Guard and the town of Ocean City last Saturday collaborated on Operation Tourist Boom, a multi-agency training exercise aimed at gauging the participating agencies’ abilities to quickly respond to multiple incidents at the same time. Allied federal, state and local agencies, along with private sector groups and quasi-public organizations participated in the operation, which went of much of the day last Saturday.

The south end of the Boardwalk looked much like a war zone on Saturday with the participating agencies swarming the area and mobilizing to respond the multiple simultaneous events. The early session on Saturday included a mass casualty incident, protestors clashing with armed National Guard personnel, for example. The Maryland National Guard and the allied agencies mobilized for incidents throughout the day on Saturday, turning the Inlet parking lot into a tent city of sorts.

Operation Tourist Boom was designed to test the local, state and federal agencies’ ability to coordinate a measured response to the types of emergency situations that have occurred in other areas in recent years.  The operation included Ocean City Emergency Services, the Ocean City Police Department, the Ocean City Fire Department and EMS, the Worcester County Sheriff’s Office, the Maryland State Police, the Maryland Natural Resources Police and U.S. Park Police from Assateague. State and federal agencies participating included the Maryland National Guard, the U.S. Coast Guard and even the U.S. Navy.

“Overall, it was a great exercise and a major success,” he said. “We were able to accomplish every training objective. This gave us the opportunity to work with Ocean City’s first-responders and test some of our capabilities. The conditions were ideal and this was a good location for this type of multi-jurisdictional training.”

“These types of exercises are important to us because they give us an opportunity to work with our civilian counterparts,” said Brigadier General Janeen Birkhead, commander of the Maryland National Guard. “In the future, we’ll be able to work better together in a more cohesive manner because of this exercise.” 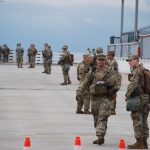 Locally, the multi-jurisdictional, multi-incident event afforded the town’s emergency first-responders to coordinate with its state and federal partners on a large-scale exercise, according to Ocean City Communications Director Jessica Waters.

“From the Town of Ocean City’s perspective, it as very beneficial training,” she said. “Not only was it a unique opportunity to train with the Maryland National Guard and several of our allied agencies, but it allowed our first-responders to participate in very hands-on training.”

Waters said after the exercise, the town is better equipped to respond to a large-scale incident.

“Not only did we make great contacts along the way, but having the ability to train together was invaluable,” she said. “We always hope for the best but prepare for the worst and Operation Tourist Boom provided us with several valuable lessons that will help us in responding to a disaster, should we ever need to. Let’s hope we don’t.”