For the second year in a row, the school system marked the start of the school year with a kick-off event for teachers at the Ocean City Performing Arts Center. Superintendent Lou Taylor reminded educators of the importance of love, passion and encouragement.

“I challenge you today, using those three ingredients, to make it magical for our children,” he said. “That’s what we’re here for. You make it magical every single day.”

Taylor, who spoke to an auditorium packed with teachers clad in matching Worcester County “difference maker” t-shirts, thanked local elected officials for their support of the school system, which is proceeding with construction of a new Showell Elementary School this fall.

He praised educators for their efforts in the classroom and their commitment to students. 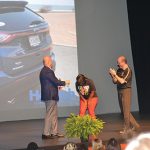 Worcester County Teacher of the Year Karen Holland reacts to the news she has been given a new car to use during the school year by Hertrich Ford of Pocomoke. Photos by Charlene Sharpe

The keynote speaker at Tuesday’s event was Kim Bearden, co-founder of the innovative Ron Clark Academy in Atlanta, Ga., and a National Hall of Fame Teacher of the Year. Bearden talked about how she and Clark had turned a run-down factory building into an innovative middle school known throughout the world. She also shared struggles from her personal life — and how they’d impacted her teaching — and even told the audience about how she’d adopted three 12-year-old boys after a school field trip to South Africa.

As Taylor had, she too reminded audience members to retain their passion for teaching in spite of hardships they might face.

“You must exude that which you hope to create,” Bearden said.

Bearden also shared some of the communication tips outlined in her latest book, “Talk to Me.” She said there were several principles of effective communication.

“The words are important, but the words are never as important as the sincerity with which you say them,” she said.

When asked for advice by audience members, Bearden said one way to help keep students engaged in the classroom was to keep them moving around. 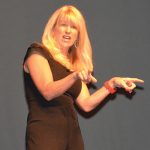 “The words are important but the words are never as important as the sincerity with which you say them,” said featured speaker Kim Bearden.

“We’re not designed to be still all the time,” she said, adding that she incorporated things like dances and games into her lesson plans. “It’s hard to sit still and be attentive for a long period of time.”

Tuesday’s back-to-school kickoff culminated with an exciting announcement for Cedar Chapel Special School teacher Karen Holland. Holland, the 2018 Worcester County Teacher of the Year, was given use of a new car for the year by Hertrich Ford of Pocomoke.

“This program is something that we’ve worked on for quite some time,” Taylor said.

Fred Hertrich of the Hertrich Family of Automobile Dealerships said the company wanted to show appreciation for local teachers, as most of its 1,500 employees were educated in public school systems across Delmarva.

“It’s all of you that inspired us,” he said. “You are a difference maker.”

Some Resort Businesses Hit Midsummer Pause For Variety Of Reasons

OCEAN CITY — As the peak season hits its midpoint in what is an unprecedented summer, some businesses in the resort over the last week have closed entirely or altered their operations voluntarily out of caution for their guests and staff.Over the course of the last week or so, a handful of resort businesses have… Read more »

BERLIN – A new promotion aims to encourage mask wearing in downtown Berlin.As mask shaming makes headlines amid the ongoing health crisis, officials in Berlin are trying to be proactive with a new social media contest. Ivy Wells, the town’s economic and community development director, said this week people who entered the contest would be… Read more »