Managing Editor Shawn Soper reached out to variety of individuals today to get their reflections on former Ocean City Mayor Roland E. “Fish” Powell, who passed away Wednesday morning at 89.

A service to remember Powell will be held at the Roland E. Powell Convention Center on Wednesday, Sept. 5, which would have been his 90th birthday. Visitation will take place from 11 a.m.-1 p.m. and the service will begin at 1 p.m.

Here’s what local individuals had to say about Powell on the day of his passing:

“We were most blessed to have Fish Powell. For me, he was a true mentor and inspiration. I lost my dad at an early age and I was just 22 and trying to figure things out and he took me under his wing. When Mayor Kelley died, the people’s choice for his replacement was clear and Fish answered the call. From a city councilman to a county commissioner and from a charter boat captain to captain of the fire company, he was just a solid, confident leader and a mentor to all of us. Little did I ever know I would be his immediate predecessor. We should be so blessed in the future and be so fortunate to have someone who could bring people together like Fish could. I am forever grateful God afforded me the opportunity to call Fish Powell my friend, mentor and inspiration. His fingerprints are all over the beaches, the Boardwalk, the hospital, the Public Safety Building, the communications center and everywhere else and I am proud he allowed me to be along with him for the ride.”

“Fish was a dear friend and a great mayor. Under Fish’s leadership, the town successfully transitioned as both the season and the year-round population began to grow. Fish was a friend, mentor and good example of what a true leader should be. He had that down-to-earth demeanor, but trust me, he could be as tough as nails if he needed to be. Just look around and you can see where the success we enjoy today can be directly attributed to Fish. Out thoughts and prayers go out to Jeannie and his family. We all loved Fish and will miss him.”

“Fish’s demeanor united the town, especially at City Hall. He worked as mayor in the newly-defined capacity and served as a liaison to the county, state and federal level. He calmed the waters and brought stability back and shepherded the town through a major transition. Fish was instrumental in encouraging me to apply to become city manager and I did that for 21 years. Through that time, I really treasured his friendship and his mentoring and he will always be near and dear to my heart.”

“I did not serve with Fish, but he was responsible for me getting the job with the Department of Natural Resources on the beach replenishment project and I later ended up on the city council. I owe so much to him for that. He was Ocean City to the bone. There was nothing false or put-on about Fish. He was just as he appeared. I am so grateful to him.”

“Fish had a tendency to be a man of few words, but one should never assume that was because of a lack of interest on his part, or a lack of desire to be involved or a lack of passion for a logical solution. Oh no, he was just a great listener. When he spoke, you damn well better be listening. What few words he may offer were well thought out, to the point and very constructive towards a solution. I learned a lot from Fish over my career with the town and have the utmost respect for all he did for Ocean City and Worcester County.” 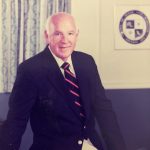 “He was a person that you respected the minute you met him. The way I always described Fish was that there are certain people that when they tell me I was wrong, but I was still sure I was right, but when Fish told me I was wrong, I knew I was wrong. We lost a great man today.”

“It was from a young man’s eyes as a 14-year-old fire cadet that I first laid eyes on Fire Chief Fish Powell. Salty, squared away, with a cigar in the corner of his mouth and donning a brilliant white fire chief’s helmet, barking out short, concise orders to many who followed them to bring an emergency situation under control. Later, as a volunteer firefighter and an Ocean City paramedic, emergency manager and eventually as director of emergency services, I learned how to become a leader from lessons learned from great men who served in the Ocean City Volunteer Fire Company and largely from Fish Powell. Fish had the unique ability to remain calm in crisis situations, to see through the chaos and lay out some common-sense steps to address any challenge. His steady hand allowed people to follow his lead with confidence. As a leader, you always knew where you stood with Fish- no ambiguity.”

“I remember several times being in the Emergency Operations Center as we were preparing for the arrival of severe weather. The weather folks often called the storms wrong, but Mayor Powell got them correct for Ocean City every time. No matter what we were facing, he was the voice of reason and calm. It was a privilege to service with him.”

“First of all, Fish Powell was not only a dear friend, but also represented the very best of Ocean City from his past history through his demise. I remember Fish when he was a lifeguard and served the town in that capacity and I remember him as a young businessman involved in real estate and he was always impeccable in everything he did. He was always willing to listen and gather the facts before making any major decision. He always represented, first as a councilman and then a county commissioner and finally as mayor, the very best interests of our county and city. He will be sorely missed.”

“I never served under Fish, but he has been a mentor to me and many other young guys in the fire company. Every time you had a question, he always had the time for you. Over the last three, four or five years, he would come over to the Keyser Point station and walk around the apparatus for his exercise and he would always stop in my office on the way in and on the way out. We’d chat about a lot of stuff, mostly fire company stuff, but also life lessons. My grandmother taught him in high school and he grew up on the Boardwalk and I grew up on the Boardwalk, so we had a connection. The old timers have always gravitated to the back row at our regular meetings. We don’t put our older officers out to pasture, but they kind of graduate to the back row and Fish was at every meeting in that back row even until recently when he couldn’t do it anymore.”