WEST OCEAN CITY — The Worcester County Bureau of Investigation (WCBI) and allied local law enforcement agencies are searching for a suspect who entered a West Ocean City pharmacy on Friday and threatened violence at the store and on the pharmacist’s family if he was not provided with narcotics before fleeing the scene.

Around 7:50 p.m. on Friday, Worcester County Sheriff’s Deputies responded to the Rite Aid on Route 50 in West Ocean City for a reported robbery. The investigation revealed an unidentified male suspect entered the store and presented a note instructing the pharmacist to provide him with narcotics. 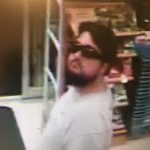 According to police reports, the note further advised that failure to provide the suspect with narcotics would result in violence at the Rite Aid and to the family of the pharmacist. The suspect was provided with a quantity of prescription medication and left the scene.

The suspect was last seen exiting the pharmacy parking lot in a black Jeep Wrangler-style vehicle. Anyone who recognizes the suspect from surveillance video still photos or has any other information regarding the incident is urged to contact WCBI Detective-Corporal Mark Titanski at 410-632-1111, extension 2290, or at mtitanski@co.worcester.md.us.