BERLIN – A new initiative at Atlantic General Hospital is providing students with disabilities with job skills through hospital internships.

“This is an exciting day for all of us in this room,” said Lou Taylor, Worcester County’s superintendent of schools. “As a school system it’s our responsibility to make sure we prepare our kids for life beyond the walls of our 14 institutions for learning.”

Through Project SEARCH, six students in their final year of high school in Worcester County will have internships at Atlantic General. They’ll spend six hours a day at the hospital, rotating through a variety of different work experiences during the school year. Onsite training, focused on employability and life skills, will be provided to the interns by a Worcester County teacher while job coaches from the Worcester County Developmental Center will also be available as needed.

“Matt is the one that works very hard with our kids to make sure they find ways to transition smoothly,” he said.

“That’s what Worcester County is all about—the partnerships we put together,” Taylor said.

Carol Beatty, secretary of the Maryland Department of Disabilities, said interns would get wonderful opportunities through Project SEARCH. She said the initiative went well with Gov. Larry Hogan’s efforts to ensure Maryland was “open for business.”

“That means that we need to have employees that are trained and skilled and can take jobs,” Beatty said. “The governor means that for all people in Maryland, all citizens in Maryland who want to work and have a career, including people with the most significant disabilities.”

Marcella Franczkowski, assistant state superintendent for MSDE’s Division of Special Education/Early Learning Intervention Services, said Project SEARCH would benefit the interns involved as well as their families, who would be comforted knowing their children were learning job skills. She said students employed meaningfully in high school were more likely to continue to do well after their academic careers had ended.

“We know that a compelling predictor of success for students is employment,” she said.

Several of the interns set to participate in the program—Toni Dixon, Tyneish Gustus, Bradley Dornes and Deshawn Collick—were introduced by Rae Record, the school system’s supervisor of special education. They’re eager for their internships to begin.

“I find the hospital really nice and I wanted to give it a try,” Dixon said.

When it came time for Michael Franklin, president and CEO of Atlantic General, to address the crowd, he opted to share a newspaper article.  The story, titled “Serving Customers a Side of Personality,” described the way Steve, a cart collector at a Kroger, was the epitome of customer service.

“No matter what he’s doing he’s never too busy to stop and greet a customer,” Franklin read. “He always makes time to thank people for shopping at Kroger and wish them a great day. Steve has taken it upon himself to become a goodwill ambassador of the store. To many that shop there, he is the store.”

The article, which was published in an Ohio newspaper in 2007, went on to stress the im 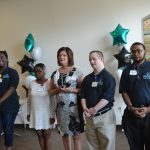 portance of a positive attitude and taking pride in work.

“Steve is my brother,” Franklin said emotionally as he finished reading.

Franklin said Steve, his older brother, had worked with a job coach for several years and went on to work successfully at Kroger, where he still works today.

He said programs like Project Search were critical because they gave people the chance to try various jobs and find out what they were good at and what they liked to do.

“Until you try you don’t know,” he said.

Franklin said his brother’s experience working at Kroger had helped him thrive.

“He was able to go to the Special Olympics and win a silver medal and do things beyond his capabilities,” Franklin said.