OCEAN CITY – A brother and sister are teaming up to clean the ocean and are asking boaters and fishermen to collect and report any balloons found offshore as part of a summer-long contest.

Last week, siblings Josh Blume, 12, and Emily Blume, 10, launched a months-long contest entitled “Blume’s Balloon Round Up.” The boat that collects and reports the most balloons found off the coast of Ocean City from June 29 to Sept. 30 will receive a grand prize.

“Anyone can participate,” Emily said. “More people means more balloons are collected and that means more animals are saved.”

The siblings said they were inspired to start a contest after hearing reports of balloon litter from their father, Luke Blume, a charter boat captain for C Boys Sportfishing. They noted the competition is a way to protect marine animals that often mistake the balloons for food.

“We wanted to do something to help the animals,” Josh said. “We thought if we got other boats to help and make it fun for them we could collect the balloons from the ocean.”

Josh said contest rules are simple. Boaters that collect balloons found offshore between now and Sept. 30 can call in or text the name of the boat and the number of balloons to his father.

“Once they bring in the balloons, they can call or text my dad,” he said.

What originally started out as a contest for local fishermen has since grown to include boats from Delaware, New Jersey and Virginia, according to Emily.

“People that are picking them up are having a lot of fun,” she said. “Our dad said people are even talking about it over the radio. If it’s a slow fishing day, it gives them something to do.”

While they are hoping the boats collect at least 1,000 balloons from the water this summer, Josh and Emily said the contest is already making great strides. In the first three days, for example, the siblings tallied 22 participating boats and 218 balloons.

The prize for the boat that collects the most balloons also grows with each passing day. As of Monday, Fish Tales, Fish In OC, Ocean City Fishing Center, Carrabba’s, Ocean City Marlin Club, An Optical Galleria, Burrbenders Knife Sharpening, Paws and Claws, and Billfish Supply have donated merchandise and gift cards for the grand prize.

“So many people have donated and have offered to create prize packs that if we get enough we could do first-, second- and third-place prizes,” Josh said.

With the help of a growing jackpot, the siblings said they hope the contest will encourage people to change their behaviors. 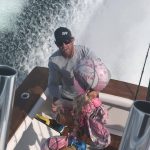 Mate Chris Hornung is pictured with some balloons he retrieved from the ocean aboard the Reel Joy. Submitted Photo

“When you are out on the water and see a balloon, you wouldn’t usually go out of the way to get it,” Josh said. “We are hoping with these incentives, it will turn into a habit.”

To participate in the contest, report your boat name and the number of balloons you retrieved to Luke Blume at 410-251-1889 (text preferred). Pictures of daily retrievals will be posted on the “Blume’s Balloon Round Up” Facebook page.