BERLIN — Habitat for Humanity of Worcester County, Inc. (HFHWC) recently held its annual meeting and inducted three new members to its Board of Directors. 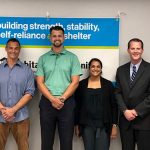 Record believes in the families and communities of Worcester County and is honored to serve families who are striving to improving our neighborhoods.

“I believe that happens one house and home at a time and Habitat for Humanity of Worcester County is a leading organization in these efforts,” said Record.

For his part, Yonker said, “The reason I joined Habitat is that I love taking care of patients in Worcester County and this is another way I can help serve the community I love. Habitat is a great organization with a great mission and I’m honored to be a part.”

Habitat Executive Director Andrea Bowland said, “We are thrilled to welcome such a dynamic group of leaders to our board of directors this year. We also had the opportunity to celebrate one of our long-serving members, Dr. Scott Knowlton. It’s always difficult to say goodbye to someone who has contributed so much and was such an integral part of our Habitat team, but we are very fortunate to have three new members coming on board to continue our mission to serve Worcester County families.”

After eight years of serving the local community, Knowlton retired from the board of directors. Knowlton was an integral part of Habitat Worcester’s working board, helping to transition the affiliate from an all-volunteer run group, to a staffed organization. Knowlton championed Habitat Worcester’s fundraisers, particularly the annual gala, and will continue to offer his support to the organization.

BERLIN – Contracts, inventory, and home prices are up on Maryland’s Lower Eastern Shore, according to the latest numbers from the Coastal Association of REALTORS® (Coastal). 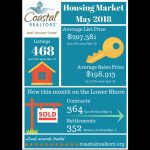 Both the average list and sales price increased in May, according to the Coastal Association of REALTORS®. Image courtesy of Coastal

“It’s great to see a little bump in inventory, because sometimes we have trouble keeping up with the demand on the Lower Shore,” said Coastal President Joel Maher. “It also looks like the people who are listing their homes are getting more money for them, which indicates an increase in the value of our housing stock.”

SNOW HILL – The Lower Shore Land Trust was among 22 recipients across the country to receive a combined $4.168 million to accelerate the pace of watershed protection.

The Healthy Watersheds Consortium Grant Program, co-funded by the Environmental Protection Agency, the Natural Resources Conservation Service and the U. S. Endowment for Forestry and Communities (Endowment), selects projects from across the country and developed at the local level to protect water quality, to benefit rural jobs associated with agriculture, ranching, and forestry, and to provide measurable benefits for fish and wildlife.

The property is located at the corner of Main Street and Dock Street. Construction is underway and according to Howard Crossan, President of Oxford Chase Development, the 9,100-square-foot store will be completed in the fall of 2018.

“I have worked with Oxford Chase Development for over 10 years,” said Hanna. “They bring a vast amount of expertise and knowledge in bringing retail stores to our area.”

This partnership further expands Chesapeake’s geographic reach with new Maryland offices in Salisbury and Berlin, along with expansion into Delaware with an office in Seaford.

“Peninsula is the Eastern Shore’s leading urology practice with four board-certified physicians and 39 staff members and has been serving patients with exceptional urological care for more than 50 years,” said Sanford J. Siegel, M.D., chief executive officer of Chesapeake Urology. “We welcome Peninsula’s physicians and staff to Chesapeake Urology and look forward to the strong contribution they will make to our practice.”

Mark T. Edney, M.D., a partner with Peninsula Urology, said, “We are very pleased to be part of Chesapeake Urology and excited about the opportunities this partnership affords our practice. We have adopted the Chesapeake Urology brand name and look forward to leveraging their significant resources and depth of operational knowledge to expand the range of clinical services we provide to patients in this region.” 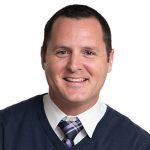 Hinman is a commercial lines client advisor designing risk management plans to safeguard his client’s assets.   For over nine years, he has worked with business owners to build insurance programs that not only fit their immediate needs but help their businesses grow. He specializes in transportation, construction and manufacturing risks.

“I have owned my company for 10 years and hands down Travis is the best insurance agent I have ever had.  He is caring, attentive and looks out for his clients’ best interests,” said Dorchester Dumpin owner Jill Johnson.