OCEAN CITY — It appears the dramatic flooding in the resort’s north end Saturday had more to do with epic rainfall amounts, limited elevation and natural topography than any flaw in the drainage system.

By most estimates, more than seven inches of rain fell over the resort area last Saturday afternoon, causing wheels-deep flooding through much of Ocean City, especially in the north end where Coastal Highway was shut down for an extended period of time. It certainly isn’t unusual for Coastal Highway and many of the resort’s roadways to flood during even modest rainfall events, but last Saturday’s storm went to new heights.

City Engineer Terry McGean this week explained the town’s storm drainage system, which flows from east to west to outfalls along the bay, was inundated during the storm and simply couldn’t keep up.

“Ocean City is a barrier island, so that means we are very close to sea level, surrounded by water and flat,” he said. “Plus, we are almost completely built out with very little pervious surface area left to absorb rainfall in the ground. What that means is that most of the rainfall runs directly into our storm drain system.”

McGean said the natural topography on the narrow, 10-mile spit of sand makes it challenging to drain storm water efficiently during a major weather event.

“The city ground and the storm drain system both drain from east to west into the bay,” he said. “We use a gravity system to convey storm water. What that means is essentially the bigger the pipe and the steeper the slope, the more water you can move. Therefore, we are constrained by the ground elevation and the tide.”

The relative flatness of the barrier island makes it difficult to get enough slope on the drain pipes that flow toward the outfalls on the bayside.

“So, take the north end of town,” he said. “The average elevation on Coastal Highway is about six feet above sea level. You need at least one foot of cover over your pipe in order to keep it from being crushed by truck traffic, so that places the top of the pipe at five feet.”

McGean said those figures give the system just five feet to fit a pipe and get it to slope toward the outfalls on the bayside.

“On the north end of town, the outfalls are farther away from Coastal Highway and there are fewer of them,” he said. “That means we have longer distances to travel to take the water from the highway to the bay which, in turn, means we can’t have as steep a slope on the pipe.”

The hydrology means the town has a thin margin to get its storm drains headed to the bayside outfalls.

“We are lucky to get a half of a percent in places,” he said. “About the biggest pipe we can install at the highway end is 24 inches in diameter and we will double those up to increase capacity. In addition, fewer outfalls means more surface area has to drain to each outfall.”

That brings the story back to Saturday and the dramatic flooding seen in some areas, particularly on the north end.

“Our goal is to handle rainfall from a 10-year storm, or a storm that has a 10-percent chance of occurring in any given year,” said McGean. “In our area, that equates to about one inch per hour during a three-hour storm duration, and quite frankly, we struggle to achieve even that and don’t at high tide. Rain gauges in the north end of Ocean City registered seven inches in three hours on Saturday.”

Essentially, the town does the best with the hydrology and topography it has to work with and when an epic rainfall event occurs, such as the one on Saturday, there is simply nowhere for all of the water to go.

“Without a cost-prohibitive pump system, we simply cannot handle that amount of water,” he said. “This is also why we require buildings in Ocean City to be elevated.”

Of course, the problem is not unique to Ocean City and other areas around the region experienced similar flooding issues during Saturday’s weather event.

“Let’s keep it in perspective,” said McGean. “Flooding occurred all over Worcester County and lower Delaware. Route 54 was closed for a period of time, as was Route 1 and Coastal Highway, but no one was killed or severely injured and no buildings were destroyed.”

The State Highway Administration (SHA) owns and maintains Coastal Highway as a state road, although the side streets are owned and maintained by the town. SHA spokesman Charlie Gischlar this week agreed with McGean’s assessment of the situation on Saturday. 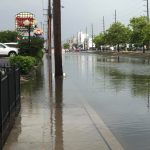 “There are several factors that occurred this past weekend regarding heavy rainfall and subsequent flooding,” he said. “During the heavy rain that the shore received this weekend, it rained a tremendous amount in a relatively short period of time. This, combined with a high tide, kept the water from draining properly into the bay. The high tide held the water back, plus it was a substantial amount of rain.”

Gischlar pointed out the tides in the bay can also contribute to the flooding on the town’s streets. Naturally, if the outfall pipes are already under water because of tidal influences, storm water draining from the roadways backs up.

“During a normal storm, water drains into the bay at lower tides so the water is able to drain accordingly,” he said. “There are times when it will rain significantly for a short period of time, such as a typical summer thunderstorm, when there may be ponding on the road, but the drains typically evacuate the water in rapid fashion.”

Gischlar also pointed out Saturday’s epic rainfall was just the latest in a long series of heavy rainfall events in Ocean City and around the shore.

“As you know, Ocean City is at sea level and maybe a foot or two above sea level once you get to Coastal Highway,” he said. “It’s also equally as important to know the ground is beyond saturated. It’s been raining heavy off and on for a few months. It doesn’t take much of a storm to being to inundate the already-saturated ground.”