BERLIN- With a friendly rivalry that began as young boys and continued through their high school and now college lacrosse careers, two former standout players from the resort area last week were named All-Americans and ranked second and third in the nation in faceoff percentage for Division II. 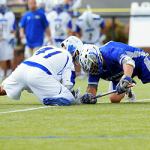 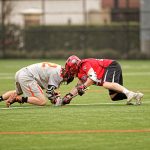 The parallels between former Worcester Prep standout faceoff specialist Ross Dickerson and former Decatur faceoff specialist Dryden Brous are uncanny. Both grew up in their family’s hotel businesses in the Ocean City area and became friends at an early age on the youth lacrosse fields around the lower shore.

When it came time to go to high school, Dickerson landed at Worcester Prep while Brous went to Decatur. Both were midfielders and faceoff specialists at their respective crosstown schools and dominated the position across. When the Seahawks played the Mallards once a year in the annual neighborhood rivalry games, their faceoff battles were epic.

The similarities are far from over, however. When it came to continuing their academic and lacrosse careers in college, Dickerson chose the University of Tampa while Brous chose Lynn University in Boca Raton, Florida, both Division II schools and both in the Sunshine State Conference.

In their head-to-head matchup this year in April, Tampa beat Lynn 13-6 and Dickerson and Brous, of course, were right in the middle of the action.