OCEAN CITY — A Greenbelt, Md. man was arrested on first-degree assault and other serious charges early Monday morning after allegedly threatening a family with young children with a knife during a fight in an uptown restaurant.

Around 6:15 a.m. on Monday, Ocean City Police Department (OCPD) officers were dispatched to the Denny’s restaurant at the Comfort Inn near the Gold Coast Mall for a reported fight in progress. Ocean City dispatchers informed officers one of the suspects involved was threatening a family with a knife.

OCPD officers arrived on scene and met with the victims, including a man, a woman and their three children ages 16, 10 and one month, who were the only patrons left in the restaurant after the incident. According to police reports, the male victim told police two men were at the restaurant counter ordering food and were dropping expletives loudly and continually.

The male victim told police he again asked Flowers and his companion, later identified as Semere Habte, 31, of Dunn Loring, Va., to stop using that language around his family and to pull up their pants. The male victim said Flowers then pulled out a knife and unfolded it so that the blade was pointed toward him and his family and began to threaten them verbally. According to police reports, Flowers launched into an expletive-laced tirade at the family as he advanced toward them and continuously said “watch your kids.” 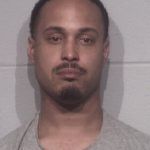 Upon arrival, OCPD officers observed Flowers dropping a knife as he has was fleeing toward his hotel room on the fifth floor. Flowers refused to exit the hotel or make contact with the OCPD officers on scene. The OCPD Quick Response Team was activated and evacuated the fifth floor of the hotel as a precaution for the safety of the guests.

Eventually, Flowers and another male, identified as Habte, surrendered to police and were placed under arrest. During the investigation, it was determined Flowers and Habte were suspects in the theft of a cell phone from the Denny’s restaurant at 62nd Street earlier on Monday morning.

Flowers has been charged with first- and second-degree assault and possession of a deadly weapon with intent to injure. Habte was charged with theft from $100 to under $1,500. Flowers was transported to the Worcester County Jail where he was being held without bond on Monday. Habte was released on a $3,000 bond.