BERLIN- It was a clean sweep for Worcester Prep when the Eastern Shore Independent Athletic Conference (ESIAC) spring post-season awards were announced this week including four student-athletes who won Player of the Year awards in their respective sports. 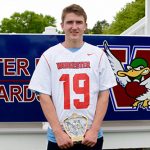 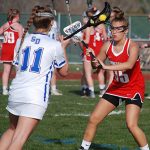 Senior Tucker Brown was honored with the ESIAC Player of the Year in boys’ varsity lacrosse for the second year in a row. Brown earned the honor last year as junior and was named again when the conference awards were released.

Last year, Brown was also a finalist for the Ensign C. Markland Kelly Jr. Award, which recognizes the top high school players in Maryland, a state with a rich tradition in lacrosse. Last year, Brown committed to continuing his academic and athletic career at Furman University in South Carolina where he will play Division I lacrosse next year.

Worcester Prep’s Carly Hoffman was named ESIAC Player of the Year in girls’ lacrosse. Hoffman, just a sophomore was instrumental in leading the Mallards to a 13-3 overall record during the season. With her tenacious play in the middle of the field, the Worcester girls won their sixth straight ESIAC championship, beating old rival Saints Peter and Paul, 11-5, in the conference title game.

Worcester Prep’s tennis teams completed perfect unbeaten seasons this spring with both the boys’ and girls’ teams winning ESIAC championships. Junior Dominic Anthony was the conference singles champion and earned ESIAC Player of the Year honors when the awards were announced last week.

OCEAN CITY -- State, local and regional conservation groups announced this week they are partnering to create an artificial island to host certain endangered colonial nesting birds as their natural habitats continue to disappear. The Maryland Department of Natural Resources (DNR), the Maryland Coastal Bays Program (MCBP) and Audubon Mid-Atlantic are partnering on research and…

OCEAN CITY -- More than 75 surfers of all ages paddled into the midtown surf in Ocean City last Saturday with hopes of “dropping in” and becoming a Maryland State Champion. The Delmarva Chapter of the Eastern Surfing Association (ESA) hosted the day-long event on the beach at 36th street, premiered a brand new electronic…

County Moving Ahead With Agritourism Legislation; Public Hearing Will Be Held

SNOW HILL – Agritourism legislation is moving forward this week after the majority of the Worcester County Commissioners agreed to put their name on the bill. The agritourism bill discussed among county officials for the last several months is now moving toward a public hearing as five of the commissioners put their name on it.…

SNOW HILL – Local bars and restaurants will not be able to continue offering carryout alcoholic drinks following a decision by the Worcester County Board of License Commissioners. The board voted unanimously Wednesday not to give establishments the ability to offer drinks to go. Though representatives of three local restaurants advocated for continuing the practice,…