Last November, the Ocean City Police Department (OCPD) Narcotics Unit, along with the Worcester County Criminal Enforcement Team, the OCPD Special Enforcement Unit and the OCPD Quick Response Team, or SWAT, began making arrests and serving search and seizure warrants following a three-month investigation into the distribution of heroin, cocaine and other drugs in the resort area. Under the guise of Operation Harbor Breeze, the allied agencies utilized undercover detectives to target street level drug distribution in Ocean City, particularly in the downtown area.

Operation Harbor Breeze was launched in part to curb thefts, burglaries and vehicle break-ins associated with street level drug distribution in the resort. From September through early December, undercover narcotics detectives were able to make 66 purchases of illegal drugs flowing into the resort. The combined value of the drugs seized during the operation was over $87,000.

In one of the major arrests associated with Operation Harbor Breeze, a known Black Guerilla Family (BGF) gang member with a long criminal history including a manslaughter conviction was nabbed in the sting after making a sale to an undercover detective at a West Ocean City convenience store. Through covert investigative techniques, an OCPD narcotics detective was able to establish an undercover connection with Shariff “The Postman” Talib, 35, of Baltimore, who was looking to deliver large amounts of heroin and cocaine to Ocean City and Worcester County.

Talib is a validated BGF gang member who has been charged in the past with first-degree murder, manslaughter, multiple handgun and firearm violations, possession of body armor, malicious burning and several possession and distribution of controlled dangerous substance (CDS) offenses. When OCPD detectives first made contact with Talib, he already had eight years of “backup time” with the Department of Corrections for a manslaughter conviction and a pending CDS possession with intent to distribute charge.

On Dec. 1, 2017,an undercover detective arranged to purchase several ounces of heroin from Talib. The transaction was set to take place at the Royal Farms store in West Ocean City at 11:30 p.m. As officers moved in to arrest Talib, he immediately rammed a Maryland State Police cruiser with two MSP troopers inside. Talib then crashed into one of steel and concrete barriers protecting the gas pumps at the store before fleeing in his vehicle on Route 50 toward Ocean City.

Worcester Criminal Enforcement Team units pursued Talib’s vehicle as it crossed the Route 50 bridge toward Ocean City. At one point as he drove across the bridge, Talib threw a plastic bag with powder inside out of the passenger window and it burst against a chain link fence, according to police reports. 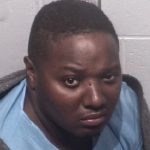 As Talib entered Ocean City, he traveled the wrong way off the bridge onto northbound Philadelphia Avenue where he crashed into the median and struck the wooden median barriers. The crash disabled the vehicle and Talib was apprehended without further incident. Talib was injured in the crash and was treated at Peninsula Regional Medical Center and released.

The plastic bag thrown from the vehicle’s window was most likely the bag of heroin Talib was bringing to sell to undercover detectives. Nonetheless, at the scene of the crash he was found in possession of one bag of heroin weighing roughly 11 grams, one bag of crack cocaine at roughly eight grams, 34 bags of crack cocaine totaling five grams, 10 more bags of heroin totaling one gram, seven bags of cocaine totaling on gram and two cell phones.